I just got to watch the first two episodes of "Party at Tiffany's" on OWN via DVR after my husband got his annual dose of "It's a Wonderful Life."

Pink Pastry Parlor isn't "exactly" in Atlanta.  It's in that odd northside area where Roswell meets Alpharetta and John's Creek.  I pass it every day taking my kids to school.

Yes, this is a REALITY show.  The program showed Pink Pastry Parlor as it really is.  Tiffany is that bubbly and outgoing All.  The.  Time.  Yes, the bounce-on-the-bed rooms are always decorated that way, they really are that huge, and it is that much fun to have a pillow fight in it.  There really are huge dance parties in the fashion runway room.  Best part of all is they have parties like this for grownups too!  (Guess what's on the next agenda at my Phi Mu alumnae club meeting?)  I was amazed at how many staff were at each party.  ("Parlettes".  HA!!!!!  )  The cupcake tower in the tea party room is the best.  Little girls need a few moments to get used to that, as opposed to the traditional birthday cake.  Once their little eyes see all the dangling crystals they don't see anything else.

My daughter's party wasn't as demanding or insane as the parties they showed.  Thank God.  We just had to scale up for the number of girls at the party.  (My little girl and 15 friends.  And people wonder why I don't have kids' parties at home....)  Cristiana was the one who helped me pick out goody bag loot, cupcake types, sandwiches, and other details.  I had already had a long day, a migraine was setting in, and this had to be done.  Cristiana made it easy and Tiffany made it a blast.  I have video that I will never live down if it gets out.

I can see why Tiffany has a show:  her personality is built for TV.  It's no act for the cameras, it's all natural.  Girl, write a thank-you note to the HR director of the company who laid you off.  Include a DVD of the show.

Let this show be a lesson - if you have a good attitude, a serious work ethic, and you love what you do and shout it to the world, you too can be a success.

Party at Tiffany's Debuts Tonight on OWN - Local Business Highlighted

Back in August I posted that a locally-owned party outfit, Pink Pastry Parlor, was shooting stock footage for a new reality show.  I just got a press release yesterday from owner Tiffany Young that shooting has wrapped and six episodes of "Party at Tiffany's" are scheduled to air on Oprah Winfrey's OWN Network.  First episode will be shown tonight at 10 PM.  If you're on Uverse it's channel 178 or 1178.  Check your listings for Comcast, DirecTV, etc.

Dunwoody does not have an indoor play establishment.  A few years back there was Zamba Fun Land in Georgetown Shopping Center.  However, according to an acquaintance that worked there, the management wasn't on top of their game and the place closed, selling off all of the giant inflatables, arcade games, and mini golf equipment.  When it's too hot/rainy/icy to play outside in a park or at a swim/tennis club, parents have to head out to Monkey Joe's (Roswell) or Jeronimo (Norcross) to let their kids blow off some steam.  The closest thing this city has to an indoor/outdoor play area is the MJCCA.  Sounds like an opportunity knocking:  an indoor play area in a local Dunwoody storefront.  Add an area for kid-only haircuts and styling in addition to the usual snacks, pizza and WiFi and someone could make a fortune.

We are incredibly excited about this and, as our loyal customers, we know you are too! Show your love and support for PINK PASTRY by tuning in for our reality television debut!

Since its premiere, the docu-series “Welcome to Sweetie Pie’s,” featuring the loud, loving Montgomery family as they run their soul food restaurant in St. Louis, has delivered double digit growth across all key demos versus year ago Discovery Health numbers, and is reaching and growing the African American women audience regularly ranking as the #2 cable network in the timeslot with AAW 25-54. “Welcome to Sweetie Pie’s” will return in March with all-new episodes.

After being laid off from a corporate job five years ago, Tiffany Young decided to follow her pink passion and open Pink Pastry Parlor in Atlanta, Georgia. Now Tiffany makes other girls’ dreams come true with specialty parties for all ages. Whatever you can imagine, Tiffany will make it happen.

In the premiere episode of “Party at Tiffany’s,” Tiffany is throwing a Latin dance party for Yuliana's 7th Birthday. When Yuliana's mother, Lorena, asks Tiffany to include an underwater element to help make Yuliana's party extra special, she must find a way to bring water into the Pink Pastry Parlor.

About: Party at Tiffany’s
Party planner extraordinaire and owner of Pink Pastry Parlor in Atlanta, Georgia, Tiffany Young, is not your typical party planner. Her goal is to celebrate pink power and female empowerment through dessert, entertainment and socialite-ing. Throughout the season viewers will see Tiffany work to make each party unique under challenging circumstances, whether a Poodles In Paris birthday party, a slumber party, or a party for a 12-year-old recording artist, Tiffany and her team of Parlettes make sure each little girl’s dream comes true. Whatever you can imagine, Tiffany will make it happen. Pink Pastry Parlor is the ultimate experience for memorable events that last a lifetime. The series is produced by Entertainment One. Executive producers are John Morayniss, Michael Kot and Tara Long.

About OWN: OPRAH WINFREY NETWORK
A joint venture between Harpo, Inc. and Discovery Communications, OWN: OPRAH WINFREY NETWORK is a multi-platform media company designed to entertain, inform and inspire people to live their best lives. OWN debuted on January 1, 2011, in approximately 77 million homes on what was the Discovery Health Channel. The venture also includes the award-winning digital platform, Oprah.com. For more information, please visit www.oprah.com/own and www.press.discovery.com/us/own. 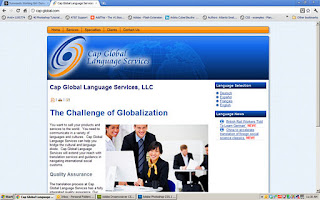 SDOC's latest customer website has launched.  Tomorrow I review maintenance and final touches with my client and turn over the keys.

Cap Global Language Services, LLC is a translation and interpretation firm based in Marietta.  It is owned by Ms. Lucia Dogbeh, a lovely lady originally from Benin.  She is a native French speaker, and has a PhD in German language studies.  She is also adept at English and Spanish.  Ms. Dogbeh has provided language assistance to firms all over Western Europe and Africa and is now expanding her work in North America.

Cap Global's original website was never completed and was designed with older coding techniques that are very difficult for a website layman to update.  We decided to just start over from scratch.

First is the text content.  For a language translation site, it all had to be multilingual.  Initial setup involved programming where translations and basic language content could be installed.  This version starts with French, German, and Spanish, with English as the default.  As her team of translators and their language repertoire grows, more language capability can be added as needed.  While there's an incredible amount of detail that is addressed in multilingual mirror pages, it's a whole lot easier than it used to be when I had to consider multiple audiences in past projects.

The graphic design is a custom-built CMS theme that started with the existing company logo.  The goal is bright, engaging, and welcoming.  Again, the appearance has to appeal to multiple cultures based on their language.  You'll notice some subtle variations in text formatting, size, and color between the language mirrors.  My client requested those variations in order to appeal to certain Western European sensibilities.

Choosing and prioritizing content for a website has grown more complex in recent years.  Although the Internet was invented in the USA, its global reach has brought out the stark differences in how people of other nations and cultures are persuaded by a website's appearance.  Different elements, structures, and colors have different impacts on people of different cultures.  For a more dramatic example, check out Izumi Family Chiropractic, whose Atlanta office resides in the Dunwoody Point shopping center on Winter's Chapel.  I didn't write this site but I ran across it the other day.  Notice how different the Japanese-language version appears from the English-language site.  Someone paid a lot of attention to the cultural variation in their customer base.

The demand for other-than-English content has skyrocketed as well.  According to this report, the majority of users of YouTube are using languages other than English.  Any time you create a website or any online media these days, you have to consider the languages used by your potential audience.  Maybe your audience is only English-speaking.  Maybe there others to consider.  The point is, the question of language has to be asked and answered at the start of your project.

Finally, never, EVER rely on online automated translators to develop multilingual content.  Babelfish from AltaVista (now Yahoo!) was the first online translator.  Google Translate has come to prominence recently and translation algorithms with language detection are included in Google's Chrome browser.  These services are good for website visitors who need a quick-and-dirty view of "other language" content.  But there's always something wrong with the grammar or the misinterpretation of colloquialisms and idiomatic expressions.  Language is how people communicate, so when you're serious about a sales pitch or educational message, or other persuasion, make sure a person is doing the translating.  It makes all the difference in the world.
at 11:42 AM No comments: