There was much wailing and gnashing of teeth when the Orchard Park Starbucks location closed.

But a new banner announces a new tenant for JavaU New York Butcher Shop that little spot on the corner between Jett Ferry and Mt. Vernon. 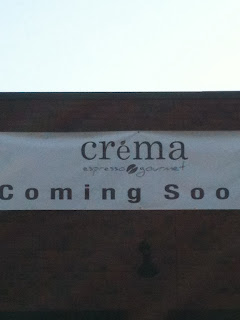 A Google search didn't turn up anything about this particular company so comments are welcome with more info.  Such as, is this a local shop, a local chain, or a growing regional/national chain.

Let's not forget Dunwoody Bakery also has high-end coffee available in a very comfy setting with all the amenities you need to go along w/ your cup 'o joe.  I snapped this shot below while looking for zucchini bread. 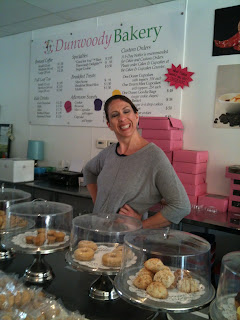 While on the subject of coffee, I can't help but think of breakfast.  Saturday mornings.  And not having to trek into Sandy Springs or Norcross for chicken biscuits that my husband kids beg for.  The coffee isn't bad either.  The building is finished, the staff is hired, the Facebook promotions are rolling ahead.  The finishing touches are being added to the exterior as of this morning. 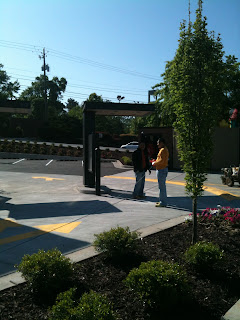 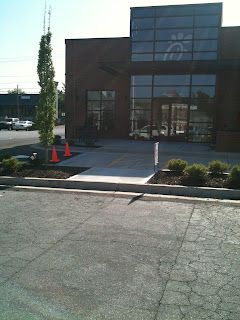 New pavement without crumbles, check.  Double drive-thru without taking over the entire parking lot, check.  Clear pedestrian crosswalks, check.  The beginnings of al fresco dining, check.  Spiffy new landscaping, check.  New Chick-fil-A location in Dunwoody's Williamsburg shopping area without having to brawl over zoning designation:  gold star.  Grand opening on May 2.  I'll be picking up chicken biscuits and big coffees in my slippers and pajama bottoms first thing on May 4.

Electronic Billboards are Coming to Dunwoody

Despite legal action and community fights, Dunwoody is about to receive electronic billboards all over the city.

In fact, many Dunwoody-area businesses have already started using them for advertising. 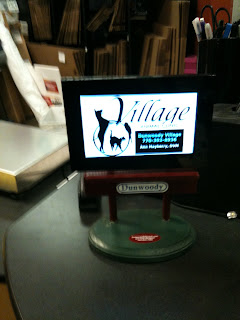 Ta-daaaaa!  (Gotcha!!!)
Miniature billboards such as the one above found in SOHO Office in Orchard Park are the brainchild of Chuck Renfroe, an advertising and traditional billboard specialist who found a way to place billboard advertising at a level where consumers will see it, without violating zoning ordinances or pissing off neighborhoods.

My first reaction, one day, when I stopped off to check my mail, was, "Hey wow!  What is that???"  The little screen was captivating and it sat discreetly on the service counter at the back of SOHO Office.  Apparently, a number of brick-and-mortar storefronts are hosting these billboards and the buzz is growing. 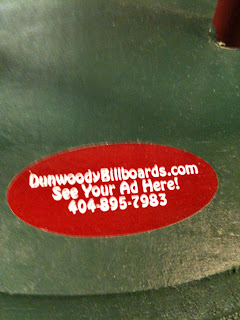 I immediately snapped the two pictures above, went straight home, blew off my "to do" list and got right on the phone to Chuck to learn more.  Chuck has mini billboards all over the North Atlanta metro region with rates and packages affordable for anyone.

In fact, I rented space in Dunwoody and Sandy Springs myself, almost on the spot. 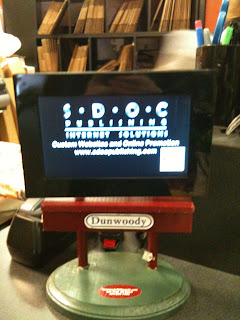 Contact Chuck at dunwoodybillboards.com for information on how to create an advertisement for his billboard network, or to host a billboard in your establishment.  Tell him I sent you and I showed him some love on the DWG blog!

Fundraiser for Tripp Halstead in Brook Run Park in Dunwoody

Registration Fee: $60 per team
Limited to the first 32 teams, each team has 2 players
Double Elimination Tournament

Raffle
We will be having a raffle throughout the day of the event with several prizes to be given away. This list will be growing over the next few weeks.


Like many moms and dads, I've been following the progress of Tripp Halstead, who had a traumatic brain injury when a tree limb fell on him at his daycare during Hurricane Sandy.  My son is Tripp's age, I can't help but stay up to date with him via Facebook and pull for him too.

The Halsteads have benefited from the organization Sunhine on a Ranney Day.  They have been hosting local fundraisers to assist the family with astronomical expenses.

My cornhole skills stink but I'm taking my family out to Brook Run on April 27.  Let's show some Dunwoody support for this family fighting for their son because it's what we would want our community to do if we were saving our own children.
at 7:52 AM No comments: