American Express promoted this past Saturday as "Small Business Saturday", where they encouraged the public to patronize small businesses as opposed to larger corporations.


In a large urban area like Atlanta, shopping between small businesses and large corporations is not necessarily an "either/or" proposition.  Each has its own purpose and place and each fills different needs.  For example, large corporations can provide jobs for those who don't want to be entrepreneurs.  In addition, about every large corporation you can name started out as a single person or a handful of people creating a small business.  Coca-Cola and McDonalds are the first to come to mind.  Coca-Cola began as a pharmacist stirring a big pot of essential oils and sugar syrup over a campfire in his backyard.  So I guess you could say that the most recognized corporation in the world began as a home-based business!

But small local businesses are tied directly to the community where they reside.  They have a greater impact on the local tax base and are often owned by a local resident.  The financial circle is very small and money stays concentrated in the community when their shops are patronized. 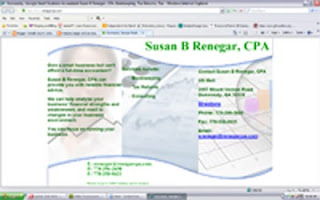 A few weeks ago, the City of Dunwoody unveiled a new series of logos created by contractor Sky Design.
The City has learned a few hard lessons about branding and logo implementation in the process.

There may be more issues on the horizon.  The City government teamed up with the Chamber of Commerce and the Convention & Visitors Bureau to create variations of the main city logo to create a sense of "unity".

Here's the problem:  there's a line between being "unified" and being "identical".  When elements of several designs are too similar - either in fonts, taglines, or structural elements of a website, etc - it gives the impression that each design represents a different division or department of the same entity.  The Chamber and CVB are NOT the City government.  They are totally independent of the City.  But the logos indicate they are part and parcel of the City government.  The City ultimately dictated the branding for two independent organizations.  The Chamber and CVB are going to have a major issue clarifying their identities as such.

The rest of this post is purely hypothetical as the decisions have been made and the City, CVB and Chamber are all going forward with what was created.  All images below are copyrighted and may not be duplicated or used elsewhere.

Scenario 1 - working with the original City logo.
First, I wouldn't duplicate the logo or taglines for the Chamber or CVB.  They need their own unique identity, just like the PCID.  However, to indicate that several organizations are playing a part in building up the new city an additional logo or icon would be created, with elements of the original for consistency.  This icon could be used on websites, stationery, or brochures to indicate that partnership.  And not just the CVB or Chamber either.  There are a lot of organizations within Dunwoody that are part of its success, including the Preservation Trust, the Kiwanis, Rotary Club, Optimists, homeowner associations, political parties, the Marcus JCC and a slew of houses of worship.
Here's the general idea:

Scenario 2 - back to the drawing board.
Here's another vision of a City logo and civic parternship icon that doesn't compare to Walmart or E-Trade and the tagline passed the Google test.
The graphic elements are a stylized star; reflecting the new beginning the city had at incorporation in 2008.  The tagline is not only open to new businesses that may establish here, but also to current residents and commuting workers.  Now that Dunwoody is its own city, the population is going to have to advance its interests, even when they're not all in agreement.

﻿And here's the "partnership" generic logo that other city groups could use to indicate their part in supporting the City.  Note the rearrangement of the graphic element above.  It's consistent with the City logo identity, but the graphic layout and the text indicate a different purpose.