From my email today:

Senior Connections is a finalist to win $25,000 from State Farm though their Youth Advisory Board Grant program.

To win, they need to be one of 40 causes that garner the most votes through their Facebook Campaign.

The contest goes through May 16 and you can vote 10x per day, please vote as many days as possible for our cause “Meals on Wheels”.

To vote go to

· Search “meals on Wheels” and click the link that will pop up.

This $25,000 will mean a lot for Meals on Wheels program and help better serve the senior community.

If you have any questions about Meals on Wheels, please contact Grant Yarbrough (info below)

For updates check out www.facebook.com/seniorconnectionsatl

The Dunwoody Homeowners Association is hosting a Candidate Forum on April 24th from 6:30-8:30 at the Kingsley Swim Tennis Clubhouse. Both Republican and Democrat candidates running for State House District 79 and State Senate District 40 will attend to present their views on a variety of issues. The tentative schedule is as follows:

Dick Williams from The Crier will be the moderator for the forum. The primary election is May 20. The address for Kinglsey Swim Tennis is 2325 North Peachtree Way.

Get Directions on Google Maps
at 12:07 PM No comments: 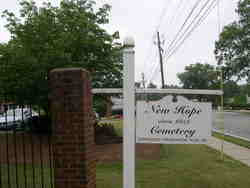 New Hope Cemetery is one of Dunwoody's historic treasures, predating the Civil War.

From the Dunwoody Preservation Trust:

Dunwoody Preservation Trust (DPT) will be working to clean up the NEW HOPE CEMETERY located 5695 Chamblee-Dunwoody Road, Dunwoody GA (across from Publix center, behind the Kindercare).

We currently have teams from Caldwell Banker Realtor – Dunwoody, Berkshire Hathaway Dunwoody/Sandy Springs, and Boy Scout Troop 764 working to assist with the Clean-up. Kris Turnbull and Erik Christensen, Owner, BullDog Movers will be leading the efforts on behalf of the DPT.

If you are interested in joining the clean-up efforts, we are accepting additional Volunteers.

During one of our evening Sounding Board sessions, we had to discuss how to regulate group homes - residential facilities where unrelated people live together for some kind of supervision and/or medical care.

"Can't we just ban them?  It would make this a whole lot simpler."

"No.  It's against the law to ban group homes.  You can regulate them the same way you regulate anything in a residential district but they can't be banned."

"Then it almost doesn't matter what we put in the Zoning code, because the minute anyone wants to establish a group home, the neighbors are going to go ballistic."

An evening's worth of Googling brought me to the law being referenced:  the federal Fair Housing Act.  Enacted in 1968, the Fair Housing Act was created to prevent racial, ethnic or religious discrimination in selling or renting homes.  In 1988, the Act was expanded to include all with disabilities (which includes those requiring any additional medical care, including mental health) and further solidified in 1990 with the Americans with Disabilities Act.


This is the Fair Housing Act text in its entirety from the Department of Justice, Civil Rights Division.

In 1999, the DOJ issued a statement regarding how the FHA viewed group homes.  In short, the conclusion was what I learned in a Sounding Board meeting:  you can't ban or otherwise regulate a "group home" to a greater degree than you would any other household of unrelated persons as this would constitute discrimination based on disability.


This is the 1999 DOJ statement regarding residential group homes.

Please note, dear readers, that the federal law predates the City of Dunwoody and anyone working for it in any capacity by several decades.  This has nothing to do with Mike Davis.  Whether you like Mike, whether you hate Mike, whether you think Mike should fall off the planet tomorrow, his hands are tied by this federal law.  Ditto for anyone else, past present or future, whose backside has warmed one of the seven chairs behind the big desk in Council Chambers.   Ditto for anyone whose name plaque has been applied to a cubicle in City Hall.   Any administrative decision, zoning change, or council vote has to be consistent with the FHA or the financial and legal consequences to the entire city will be devastating.

So if you find yourself in a position where you feel a burning desire to protest against the establishment of a group home, get your poop in a group and your facts straight.  Your "feelings" about this type of establishment are not only not relevant, they could be used against you should you lawyer up and head to court.  The links above are what you are up against.  Make sure you have documentable facts to support your protest.  Otherwise you are out of gas - the DOJ takes a dim view of NIMBYs.

Here's some of the more pointed tidbits from the Q&A section of the second link:

The Fair Housing Act makes it unlawful --To utilize land use policies or actions that treat groups of persons with disabilities less favorably than groups of non-disabled persons. An example would be an ordinance prohibiting housing for persons with disabilities or a specific type of disability, such as mental illness, from locating in a particular area, while allowing other groups of unrelated individuals to live together in that area.
To take action against, or deny a permit, for a home because of the disability of individuals who live or would live there. An example would be denying a building permit for a home because it was intended to provide housing for persons with mental retardation.
To refuse to make reasonable accommodations in land use and zoning policies and procedures where such accommodations may be necessary to afford persons or groups of persons with disabilities an equal opportunity to use and enjoy housing.

Q. Who are persons with disabilities within the meaning of the Fair Housing Act?The Fair Housing Act prohibits discrimination on the basis of handicap. "Handicap" has the same legal meaning as the term "disability" which is used in other federal civil rights laws. Persons with disabilities (handicaps) are individuals with mental or physical impairments which substantially limit one or more major life activities. The term mental or physical impairment may include conditions such as blindness, hearing impairment, mobility impairment, HIV infection, mental retardation, alcoholism, drug addiction, chronic fatigue, learning disability, head injury, and mental illness. The term major life activity may include seeing, hearing, walking, breathing, performing manual tasks, caring for one's self, learning, speaking, or working. The Fair Housing Act also protects persons who have a record of such an impairment, or are regarded as having such an impairment.
Current users of illegal controlled substances, persons convicted for illegal manufacture or distribution of a controlled substance, sex offenders, and juvenile offenders, are not considered disabled under the Fair Housing Act, by virtue of that status.

This excerpt is the biggee

Q. Can a local government consider the feelings of neighbors in making a decision about granting a permit to a group home to locate in a residential neighborhood?
In the same way a local government would break the law if it rejected low-income housing in a community because of neighbors' fears that such housing would be occupied by racial minorities, a local government can violate the Fair Housing Act if it blocks a group home or denies a requested reasonable accommodation in response to neighbors' stereotypical fears or prejudices about persons with disabilities. This is so even if the individual government decision-makers are not themselves personally prejudiced against persons with disabilities. If the evidence shows that the decision-makers were responding to the wishes of their constituents, and that the constituents were motivated in substantial part by discriminatory concerns, that could be enough to prove a violation.

Federal Law:  learn it, know it, live it, love it.  Keep your case factual, document your facts with more facts and evidence, and check your personal emotions and feelings at the door.  Then you'll have a much stronger case should you wish to protest this type of situation.

Addendum, 4/8/2014
I've been accused of being too subtle.  Fair enough.
Below is a comment in response to a question where this post was added to my Facebook timeline.
This is about a proposed group home for minors w/ eating disorders on Manget Way. I don't know if the homeowners involved have hired an attorney yet, but they would be wise to start zipping their lips. The comments made in the Crier articles and on Crier website/FB can be used as proof of discrimination. The links to the DOJ website in the blog are the most important. I sent an email to the Exec Board of DHA advising them to tread carefully. it's going to take more than a bunch of angry yelling to get your way on this one - you have to *prove* that your complaints/concerns are legitimate and not NIMBY-ish. I'm worried that the DHA will become the usual pep rally (my words, from the email) and people will be more concerned with yelling whatever pops into their heads rather than actually winning their case. I see a federal judge in the future.
at 9:30 AM 2 comments:

For the 3rd year, the Dunwoody and Sandy Springs Chambers of Commerce are putting on the Greater Perimeter Business Expo to showcase the business community that supports our tax base.

This year, there is an extra emphasis on local enterprises.  Dunwoody is home to a long list of start-ups and entrepreneurs.  Over 80% of licensed businesses in Dunwoody alone have fewer than 10 employees; many of these are family-owned and operated.  Locally-owned businesses play a big part in building and preserving Dunwoody's character now and in the future.

If you are an entrepreneur or family-owned business, take this opportunity to showcase your locally "grown" business.  Home business owners are welcome too!  Small businesses can get a booth or table together to share costs.  Call the Dunwoody Chamber office for more info at 678-244-9700

Visit the Expo at www.gpbe.org to register as an exhibitor or for the luncheon or after hours event. 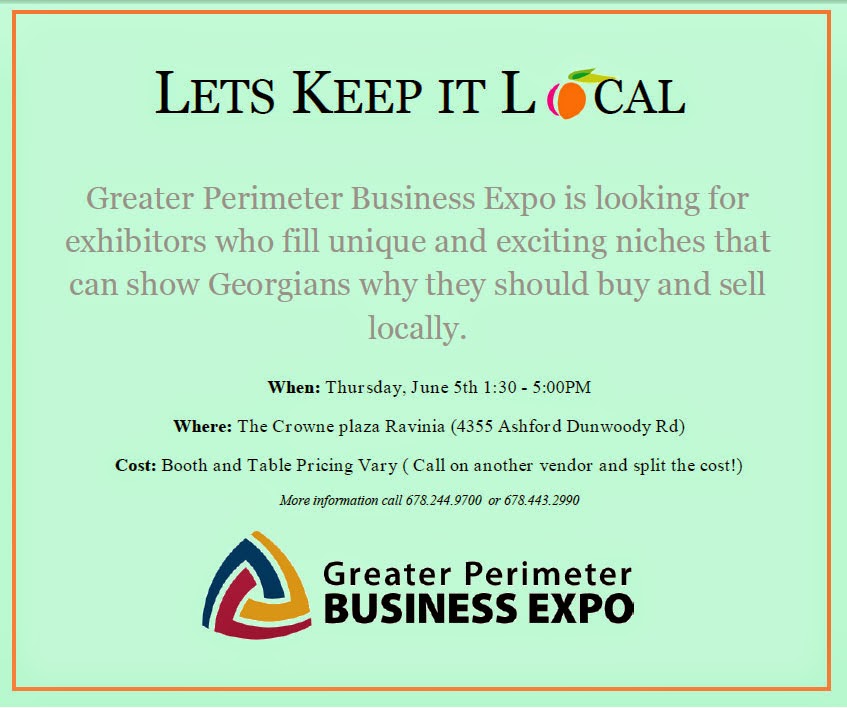 The commentary prankster is back! 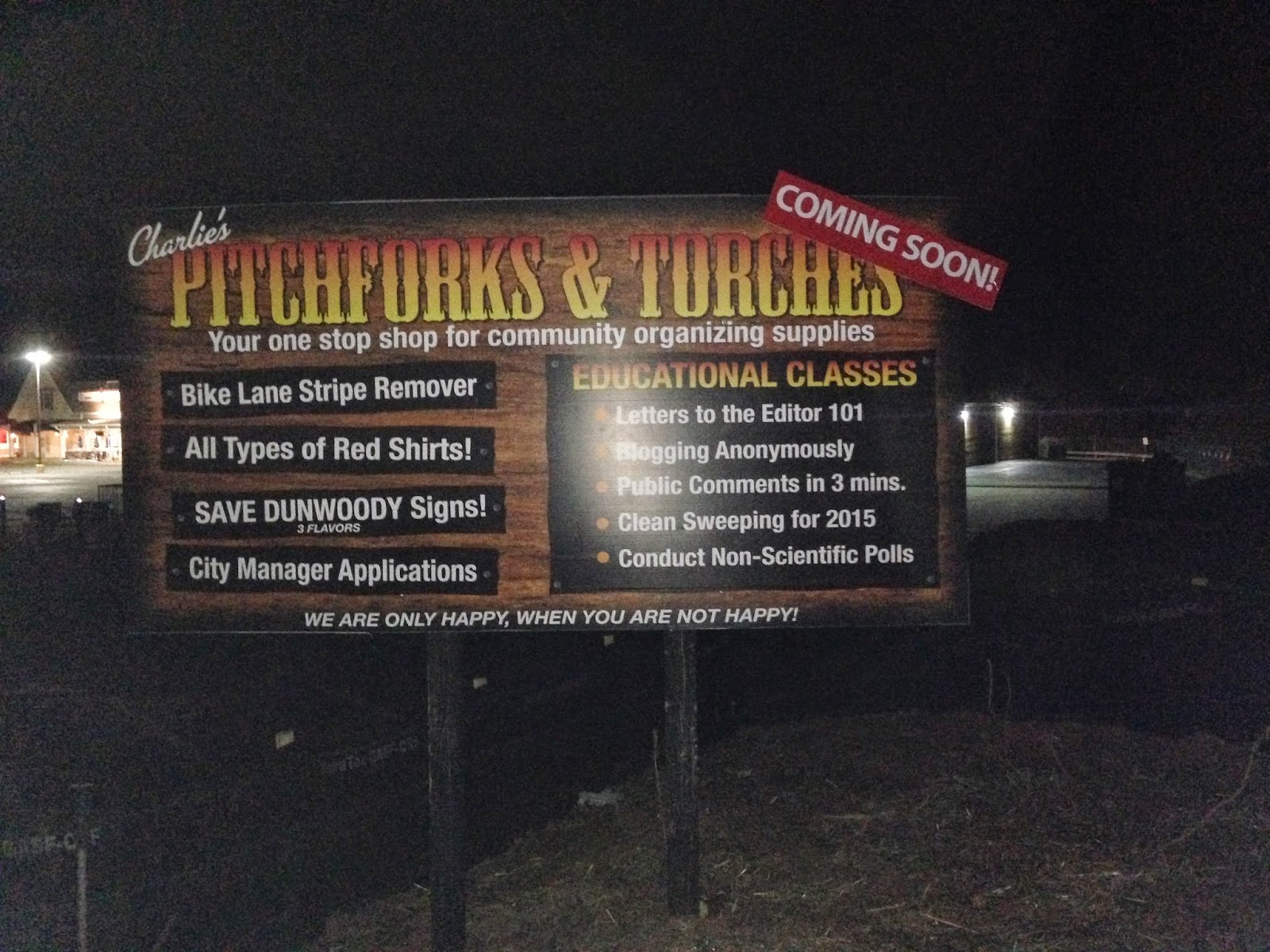