Insights Into Dunwoody After the GA06 Special Election

Even the most staunch, long-term "I've lived in Dunwoody longer than YOU!!" citizen is coming to realize that Dunwoody's population is not a monolith but a mosaic of assorted lifestyles and ideologies.  Like it or not, there are people different from "us" (whoever "us" may be) living in our fair city.

Not everyone is accepting that fact peacefully.  In fact, a few weeks ago an anonymous Dunwoody resident posted this comment to Stan Jester's blog, regarding where "REAL" Dunwoodians live and that "those others" should be cut off outside of city limits. 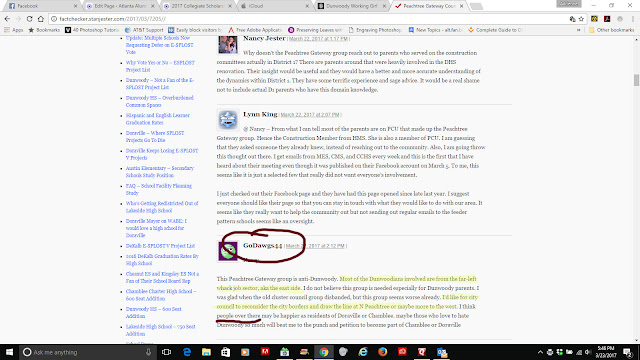 But is this right?  Is our city split along district lines, with District 3 being all "those" whackos?

Let's take a look at how Dunwoody voted in the House District 06 special election.  This image was taken from an interactive map that showed precinct results from all District 06 precincts.  (View it in Firefox for best results.  Mousing over or tapping each precinct will highlight the borders and give a final vote tally.)
http://www.myajc.com/news/gen-politics/how-each-neighborhood-voted-the-6th-district-runoff/72ZamHK2RQLoVsvFhcfWjM/

Here is what Dunwoody looks like.  Red and Blue are self-explanatory 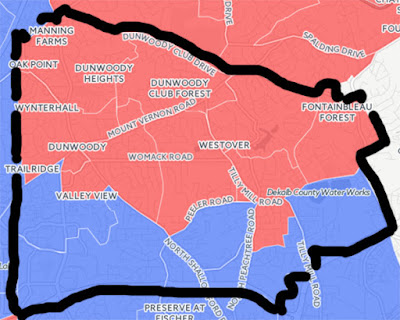 What's this we see?  Dunwoody's districts, divided via north/south lines are not the boundaries of the red and blue majority votes.  The ideological divide in this case split along a roughly east-west  through all three districts.  The "blue" segment is a mix of apartments, condos, large-scale commercial space and long-established single family neighborhoods.  The "red" district sees its own share of high-density housing as well.

The putz who wrote the stupid comment above may well change his tune to say, "Well, just cut off that perimeter district" instead of Dunwoody's east side - same difference."

Not so fast there, Skippy.

The perimeter area houses the commercial districts that are paying 70% of the property taxes, which are keeping residential tax rates stable.  And - making the existence of Dunwoody feasible as a city.\

So what did we learn from this week, aside from the fact that if we never see a canvasser again it will be too soon?

A closed SunTrust branch is planned to become a hotel with a walkable retail/restaurant center.

Next up, Brent Walker from Dunwoody Parks & Rec reviews the current state of the Brook Run Master Plan.

Who wants to see a former Dunwoody bank transform into something new?

Our June board meeting is this Sunday, June 4th at 7:30pm in Room 4 of the North DeKalb Cultural Arts Center at 5339 Chamblee Dunwoody Road (attached to the Library.) Branch Properties will present their preliminary plans to redevelop the site at Ashford Dunwoody Road and Perimeter Center East that currently houses a closed SunTrust Bank building (see the property on Google Maps here). We will also get a presentation from Brent Walker, Parks and Recreation Director, on the Dunwoody Parks Master Plan with details on the proposed Brook Run Plan.


Here's the official agenda. Print or save to your device and bring it along. See you Sunday! 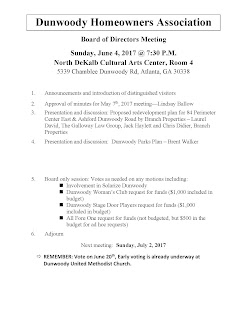