“We have over 180 juniors and seniors enrolled in the Academy for the 2014-2015 school year. This is a two year program that exposes students to personal finance, entrepreneurship, marketing, corporate finance, macroeconomics and international business. It is a "mini" MBA and is a great stepping stone for majoring in business in college as well as providing unbelievable experiences for the students. They are exposed to many different real life topics and compete in a number of business competitions. It sets the student apart from others in their college and job search process.”

Check out the student business offerings at the Dunwoody School Daze blog.

My personal favorite is the "Dunwoody Mom Tshirt".
I purchased 2 right on the spot.
Good luck Elizabeth and mackenzie!  (And yes, they are great about delivery!) 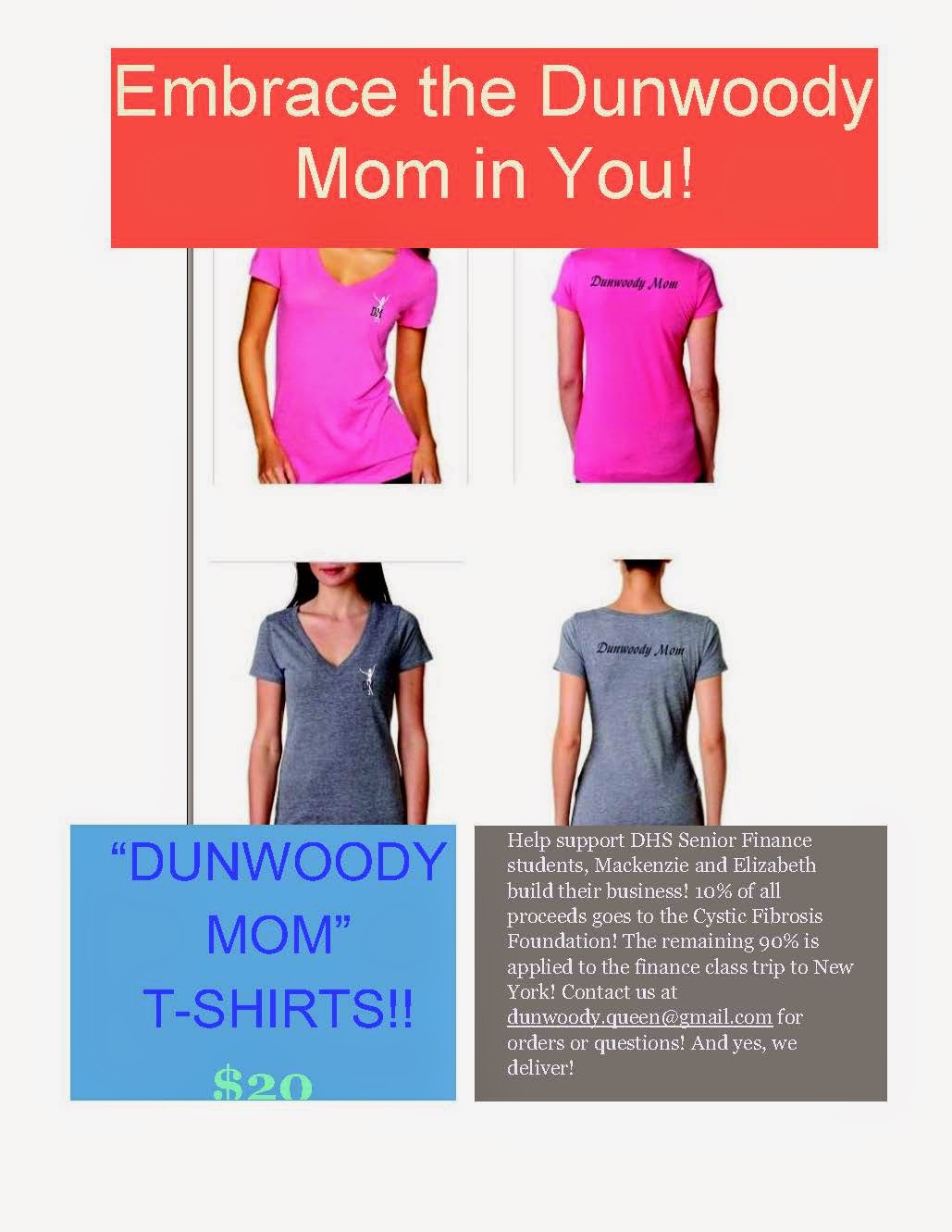 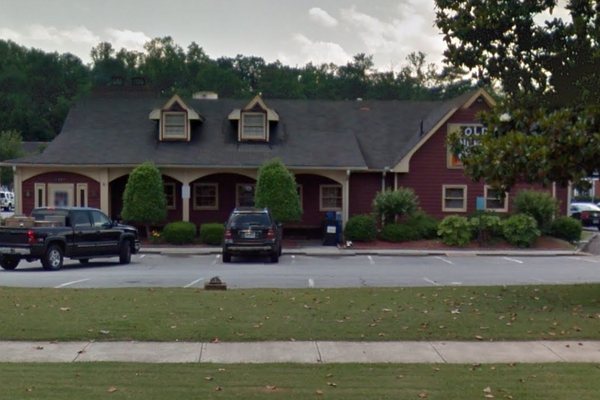 No one likes change that they have no control over.  So when word started flowing that OHH was closed for "renovations", then the above linked article appeared in the ABC and on Facebook many are mourning the Dunwoody landmark.

Ironically, many are the same people who were concerned about quality of food, the deteriorating condition of the building, the staff, unacceptable health department scores, and the like.  Then there was the swindling incident right in the lobby about this time last year.

The Circle of Life continues to turn, even in Dunwoody where there are always efforts to stop time.

We won't go without BBQ (Memphis BBQ is open) and for breakfast, there is First Watch (great pumpkin pancakes), J Christopher's (another traditional Dunwoody staple) and Another Broken Egg (this one has a liquor license.  Bloody Marys and Mimosas all around!!).

In all seriousness, this is a cloud with a silver lining for someone.  There's a significant segment of the Dunwoody community, age demographic roughly on the right side of the curve, that likes to get together and talk politics and community.  Along with at least one city council member and one DeKalb county senior staff.  (Who needs to find a new "office".)  Another restaurant could benefit from Old Hickory's unfortunate demise while providing that "comfort zone".

Damn, I'm going to miss their sliced pork and BBQ sauce.  And the smell of hickory smoke in the air when I drive by. 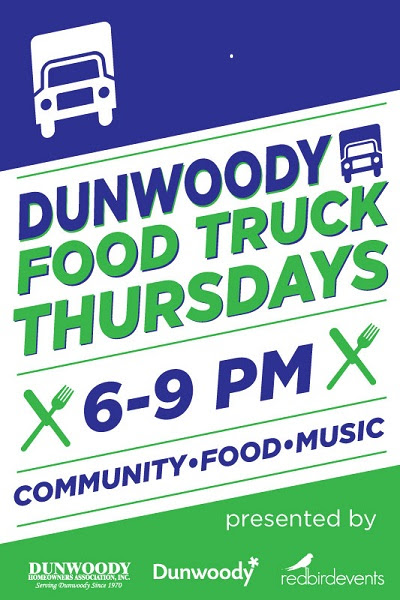 Because I'm ticked off enough to share far and wide.


To the jerk in the Lexus behind me in the exit line at Georgetown Plaza:

The reason i did not leap into the intersection the nanosecond the light turned green was because there was a pedestrian in the crosswalk coming towards the Starbucks. A senior citizen pulling a cart. Not the fastest person in the world. But how fast they are walking is irrelevant because they always have the right of way.

You and your toy horn started freaking out even more when they crossed the midway point. Believe it or not, Ripley, you still don't drive around them while they're in the street. I'd rather deal with your temper tantrum that eclipses anything my 4-year-old can pull, than get a citation from Dunwoody Police Department and possible points on my license. Or worse.

If you want to play Frogger at that intersection, be my guest. At your own risk. Leave me out of it. Enjoy your 15 minutes of shame on DPD's feed.

So save the hand waving and swearing in my rear view mirror for someone who cares. It's not going to change my driving judgement.

Have a wonderful weekend!
Love and kisses,
Me

PS - Tailgating me for several blocks with the continued waving and yelling doesn't change anything either. It just confirms that my first assessment is correct - you're a jerk.

The final child has been dropped at her first day of school, the youngest gets on the school bus and sits in his seat without a fuss, and my work schedule looks like a solid block of time to be allocated, rather than a jigsaw to be worked in around summer camps and pool excursions.

My husband said I wouldn't know what to do with myself if I don't hear a child whining "I'm BOOOOOOOORED" every hour.  I know good and well what to do!  I have themes that need their responsive javascript updated, I need to have client meetings over new websites still in the hopper, WineShoe has a LivingSocial deal that needs its codes added (and there's always a glitch with Living Social), there's new staff at the Chamber that need continued onboarding with our online systems, and I've got three databases that need to be migrated and a massive new site that needs a new host that can handle the load without costing a fortune.

That'll keep me busy for about a week or 10 days.

Seriously, there's been a lot of design work this summer, especially on older sites that need upgrades.

I have never met a website that was "set it and forget it."  Web languages and CSS (cascading style sheet) codes are always evolving so what looked nice at the time it was written may be ineffective and slow in only a year or two.  The biggest change in recent years has been the growth of mobile devices with their smaller screens.  The psychology and design principles of arranging information on smaller and smaller screens is a gigantic new consideration in both website design and function and it's no longer optional.

The Atlanta Panhellenic is a conglomerate of 20 sorority alumnae groups affiliated with the National Panhellenic Conference.  AAPA was founded almost 90 years ago and has called Dunwoody home for more than 10 of those years.  AAPA has been assisting high school women through the membership recruitment process in local colleges and universities, has awarded increasing amounts of scholarship funds to high school, collegiate, and alumnae scholars, and encourages philanthropic work in metro Atlanta communities.

I upgraded the website from static HTML to WordPress a year ago, but even WordPress has changed greatly in that amount of time.  The new theme is now fully responsive.  That is, its elements rearrange themselves to fit the screen being used to view it.  I was also able to streamline the plugins required to arrange and maintain all of the content, between updating the theme and WordPress' latest 3.9.x release.

The leadership wanted to maintain the left-anchored vertical menu and update the feminine font in the menu and page headers.  But how does that work for, say, an iPhone?

In this new theme, the page headers remain in their script, but the vertical menu of the desktop site disappears on smaller screens and is replaced with an icon and dropdown menu in simpler lettering.  This makes the site easier to read and navigate on smaller screens without excluding any content.

There's also a greater move toward presenting social media, both by the collective and each individual member group.  Facebook, for all of its controversies and faults, still has the most flexible API (application programming interface) that permits information from the social network to be displayed in numerous ways on a website.  AAPA has an open Facebook group to encourage communication between members and the general public.  Many members have Facebook pages as well.  So the new theme devised a way to display the open group on the front page:

Member groups also have their Facebook feeds displayed on their pages if they are using an open page.   Space is also available for Twitter feeds and linked to closed Facebook groups or LinkedIn groups.

Even though Facebook is phasing out the organic reach of Pages, they are still useful in engaging an audience.  I'm getting a lot of requests to embed Facebook page information on website home pages.  Updates to the page are automatically added to the website, so to speak, so to the viewer there is always something fresh to read and some interactivity to join.  Twitter also has an API that is easy to integrate into a webpage.

Take a look at your website and decide if it's still as useful today as it was when it was created on current technology.  If it takes a long time to load, if your content management system is out of date, if it looks miniscule on a phone or a tablet, then it's time for a professional upgrade.

One down, several more to go.  Happy Back to School Week!

One week and counting til DeKalb's first day of school

Just finished the supply lists.  Anyone else?

Everyone goofing off on Friday, you have to find some other way to run out the clock than playing around on Facebook.
Armageddon's next!
at 12:22 PM 1 comment: Links to this post