Watch out, Thumbtack! LinkedIn is about to debut Profinder

About a year ago, TV commercials for a contractor-finding service entitled Thumbtack started popping up in our sitcoms.  Thumbtack was innovative (as compared to Yelp, Angie's List, or Kudzu) because it was more than just a directory with feedback from customers.  Thumbtack also offered an interactive marketplace where customers could be matched with willing contractors based on the type of work needed, location, and price range.

This week I was in a phone conference with some developers from LinkedIn who are rolling out their own service, Profinder.

Profinder works on a similar principle.  It is easier to use than the other directories because Profinder draws on your currently-available LinkedIn profile information.    Customers can submit their job information, price, etc, and professionals in that field can bid on their work.  Or, a customer can visit a LinkedIn member's Profinder page and request a bid for free. 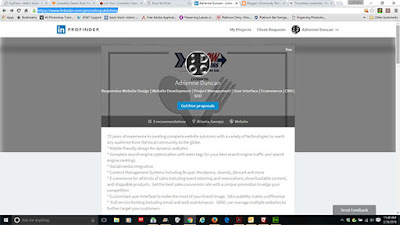 Profinder is currently live in San Francisco and New York.  SDOC was asked to test-drive the new service in Atlanta and chat with the developers as they fine-tune the user interface and features.  In my phone conference, the folks in charge say they will be expanding Profinder to the Atlanta area in about a month-ish.

If you're on LinkedIn, keep your eyes open for this new way for your enterprise to connect with customers.

Your donation will be sold in the Flea Market Finds at our Country Store during Lemonade Days. One-hunded percent of proceeds go toward the Donaldson-Bannister farm restoration.

Deliver your finds on Saturday, March 5th from 9am to noon to the Donaldson-Bannister farm at 4831 Chamblee-Dunwoody Road. 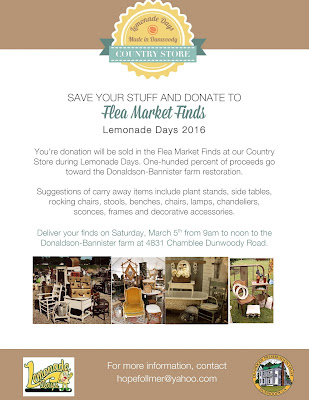 A DeKalb legislator wants to financially penalize DeKalb cities for incorporating.  But not ALL cities.  Just the ones that incorporated in this century in order to stem the financial hemorrhage due to corruption and mismanagement.

The Pension Legacy Tax
Punitive and Based on False Assumptions


I am writing to alert you to a potential property tax increase coming from the Georgia General Assembly. House Bill 711, sponsored by Rep. Mary Margaret Oliver (D-Druid Hills), seeks to add a special tax district to cities formed after 2005. Rep. Oliver believes that newly formed cities owe, what she refers to as, "pension legacy costs". The notion that these legacy costs exist is false and here's why.


1. Newly formed cities continue to pay fully into the General Fund and the Fire Fund. Embedded in these funds are the costs for benefits, including pensions for the employees providing these services.


2. Newly formed cities continue to pay fully into the self-sustaining funds of Sanitation and Watershed. Embedded in these funds are the costs for benefits, including pensions for the employees providing these services.


3. DeKalb County lowered the millage rate for the Police Fund (a fund newly formed cities do not pay into) in the 2015 budget.


4. DeKalb County did not reform the pension benefit system until December 2015 - 7 years after the formation of Dunwoody.


House Bill 711 is only directed at newly formed cities. It is punitive, based on false assumptions, and is not congruent with the facts. Make no mistake about it, it is a discriminatory tax aimed at Brookhaven and Dunwoody. It is a bailout that would allow DeKalb County to continue poor fiscal management.

This afternoon, right around dinner time, we had the official drawing. Names on pieces of paper in the Tupperware bowl and the winner was ceremoniously chosen by my 5 year old son (who has the least amount of interest in this contest, so he is clearly unbiased.)

Rick - email or call me I have to submit names to the guest list tonight.

Thanks everybody for playing. Please try again next year when SDOC will be sponsoring again. 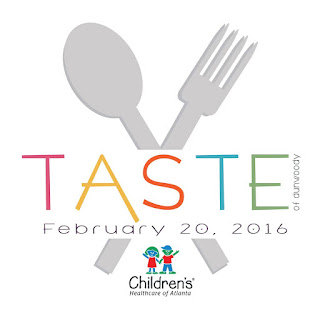 Taste of Dunwoody 2016 is coming up THIS Saturday, February 20. SDOC is offering two FREE VIP tickets to our supporters. If you are in the Dunwoody/North Atlanta area and would like to attend the community event of the year here's all you have to do:
1) Like SDOC's Facebook page

3) I will pick a winner at random from the list of visitor posts.

(Required disclaimer: I acknowledge that this giveaway is in no way sponsored, endorsed or administered by, or associated with, Facebook.)


SDOC is proud to support Taste of Dunwoody and Dunwoody Friends of CHOA as a platinum sponsor
at 5:23 PM No comments: