Earlier this spring, my husband was walking my first-grade son to school.
They fell on some broken pavement in the street.
Senior wrenched his ankle.  Junior broke his arm.

Only a couple of blocks from school, a Good Samaritan stopped in the street and took them both to Chesnut ES.

Senior ignored his ankle.  Junior's arm was splinted by the school nurse.

This entire sequence, from initial accident to entering the doors of the emergency center, took just shy of an hour.  That includes the Legendary Rush Hour Traffic on I-285.

In dire need, my husband was willing to get in a stranger's car for the offering.  To this day, we have no idea who this stranger was.  We still look forward to thanking them properly.

At NO time, did any of the people involved think of calling 911 for an ambulance.

Because everyone just knew and accepted that they would take forever, or just not show up.  Meanwhile, a 7-year-old is in agony and in need of a radiologist to define the type of break, a nurse to provide pain control, and a surgeon to pin the bones together.

Yes, we are getting screwed out of our tax money that is paying the contract for these services.  Yes, we have to obey traffic laws while getting to emergency care.  Yes, more often than not, these are lay people providing care until arriving at the hospital and they have to "wing it" more than trained professionals.

With response times stretching north of 30 minutes, it has become common knowledge that jack-leg self-transport is better than emergency services.

The stupidity that includes responses about the "shape" of  Dunwoody and the structure of the contracts don't deserve the time of day from the tax payers.  We're too busy taking care of each other when we need aid.

Further commentary from Councilman Nall when asked about sharing services with Fulton and/or Sandy Springs:

Had my family been closer to the Fulton line, they might have considered this advice.

And Dunwoody's detractors wonder why we incorporated as a city and continue to demand city-operated services.  This is why.
at 9:59 AM No comments:

Has a new restaurant been selected for Mt Vernon / Chamblee Dunwoody intersection? 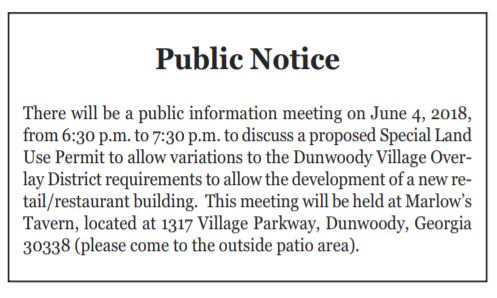 This public notice appeared in the Crier on May 22. It was posted by Crim & Associates regarding the corner of Mt. Vernon and Chamblee-Dunwoody that has been a gas station, a car wash, and was supposed to be a "Rize" pizza restaurant before their financial troubles.

Crim is submitting a SLUP with requests for variances on June 5 for further development of this parcel.

Crim is also the developer investing in the "chef driven" restaurant and retail space at Dunwoody Green. Meet at the patio at Marlow's Tavern

If you're interested in seeing the evolution of the Dunwoody Village overlay district, as well as more boutique or "chef-driven" establishments, you'll want to attend this required public meeting on June 4.
Crim's flyer describing the development on their corporate website
at 1:06 PM No comments:

Over the finish line


There was "caution" tape over the middle school locker hallway this week.  The admins wanted to put crime scene tape but NooOOOOOoooooo......
at 6:38 PM No comments:


Anything from current traffic, to zoning information, to the next city council meeting date to job postings.
Nick O'Day, the Chief Data Officer, says not to worry, they are not recording private conversations.
"It's about being able to ask a question and get a real answer right away versus having to call somebody and the city and get passed to a planer or an engineer," says O'Day. " We cannot access their name, their location, their voices, we can't access any of that kind of stuff."


This was brilliant and I had no idea it was possible!

Because it simply responds to questions, Alexa can be used by anyone of any generation.  Even people with some disabilities that make using a phone or computer difficult.

Alexa can cut down on the number of phone calls to city hall.  Or frustration at the website for users unfamiliar with it.

How about running audio from city council and other meetings?  Or even from the community conversations on development, like the one about Robers Drive this week?

Congrats, Johns Creek!  Dunwoody - will you consider deploying this type of technology to your citizens too?
at 1:46 PM No comments:

It's Official - Summer May Now Begin

After a one-week rain delay Food Truck Thursdays kicked off with a live band, courtesy of City of Dunwoody government.  We're looking forward to another season, every Thursday through October, weather permitting.

A little bird told me that the rained-out Kosher food night has been rescheduled to May 17.

Weather updates will be posted to the Dunwoody Food Truck Thursdays Facebook page and copied to the DHA page.  Anyone can see these updates even without a Facebook account.  If the weather looks like it's changing, updates about cancellations will be here. 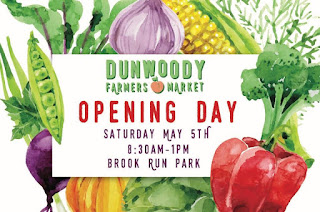 Tomorrow sees the debut of the all-new Dunwoody Farmers Market.  The committee has been hard at work lining up vendors, establishing some managers to oversee operations, and set up a fun communal atmosphere on Saturday mornings.  DHA and yours truly will be on site with some goodies so come say hello while you shop for dinner.

DHA Board meets on Sunday at 7:30 at the North DeKalb Cultural Center.  Everyone is invited to be part of the conversation.  There will be candidates for office introducing their campaigns and local legislative updates that will impact Dunwoody's direction.  Join us on site or watch the live stream on Facebook.
at 11:23 AM No comments: