Enjoy golf and other fundraising events in this gala to support Dunwoody Football.  Please see the info in the image below for details. 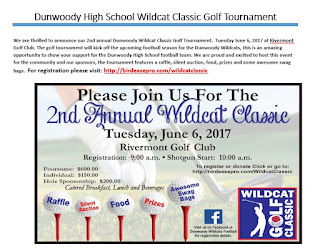 Just heard the news that Steve Foote, Dunwoody's Community Development Director has resigned and will be leaving his post in May.

Comments are open for more input.  If you are adding details, please include some form of verification.
at 8:49 AM No comments:

December 2016:  Dunwoody's 3rd ever SLUP application to see customers is heard in the usual public proceedings.  Applicant jumps through excessive hoops to prove he respects his neighbors and the integrity of said neighborhood.

In spite of neighbor support, the usual suspects circulate petitions, trespass on the applicant's property to take photos, and lie through their teeth about the homeowner's intentions to city council to oppose the application.

January 2017:  City council lines up behind the idea that since the business itself didn't fit the "comprehensive plan" the permit should be denied.  **  The actual facts of the application were ignored in favor of a personal value judgement with a personal interpretation of a city planning document.  All city council members were unanimous in their support.

March 2017:  Steve presents these edits to the Dunwoody Homeowners Association monthly meeting.  The proposal is received like a fart in church.

April 2017:  Planning Commission and City Council process the ratification of scaled down edits that include limiting the hours that a homeowner may see a customer and limiting the types of businesses that may bother to seek a Type B license.

During this time, the home business map is getting updated.  So far I had been keeping up with licensed businesses in a list generated by Economic Development and local business directories like the AHA Connection and NextDoor.  I added to this a systematic review of corporation records taken from the state registries.  Specifically, I looked for corporations registered to a home address.  I've only gotten to the "P"s and the number of home businesses documented (and active) has doubled.

In the mean time, there have been no complaints against home businesses filed since June 2016.  The last code violation confirmed against a home business was February 2016.

That's two complaints filed in 14 months, with only one violation.  If we were talking about animals or pets, city council would dismiss these as exceptions.

In spite of Mayor Shortal's pontificating about "protecting the community", there is apparently nothing to be protected from.  These code updates are not solving a problem.  They are a threat against anyone who would dare to submit a "Type B: application.

What makes this scenario funny is that nothing will change.  City Council passes their rules and congratulates themselves on their service.  While all ONE-THOUSAND-PLUS households in this image will continue to do whatever the hell they please because they are clearly not bothering anyone.  Including seeing customers or holding meetings. 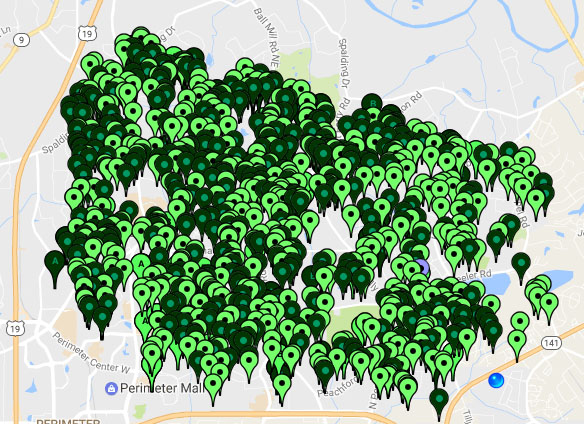 The complete map with legend:  here

Go ahead, Rooney!  You just keep chasing Ferris.  We know how this ends.

**In a couple of weeks, the "strict interpretation of the comprehensive plan" applied to home business owners will be thrown aside so council members may enact a "pet" project.  Stay tuned.
at 10:45 AM No comments:

I needed to see this today as I help run a political forum in the midst of hyperpartisans and other knee-jerk-reactors.  Not to mention our own city council and their contradictory decisions.

"Treat others as you would be treated".  The Golden Rule.  In Christian doctrine, it comes from Jesus' Sermon on the Mount, in the gospel according to Matthew.

Every major religion has some ideal analogous to this.  Yet it always keeps getting lost.

So fresh and new for the 21st century is a new term for an ancient ideal:  Emotional Correctness