The Pilgrims had come to America not to conquer a continent but to re-create their modest communities in Scrooby and in Leiden. ...  The Pilgrims' religious beliefs played a dominant role in the decades ahead, but it was their deepening relationship with the Indians that turned them into Americans.
By forcing the English to improvise, the Indians prevented Plymouth Colony from ossifying into a monolithic cult of religious extremism.  For their part, the Indians were profoundly influenced by the English and quickly created a new and dynamic culture full of Native and Western influences.  For a nation that has come to recognize that one of its greatest strengths is its diversity, the first fifty years of Plymouth Colony stand as a model of what America might have been from the very beginning.
By the midpoint of the seventeenth century, however, the attitudes of many of the Indians and English had begun to change.  With only a fraction of their original homeland remaining, more and more young Pokanokets claimed it was time to rid themselves of the English.  The Pilgrims' children, on the other hand, coveted what territory the Pokanokets still possessed and were already anticipating the day when the Indians had, through the continued effects of disease and poverty, ceased to exist.  Both sides had begun to envision a future that did not include the other.
In the end, both sides wanted what the Pilgrims had been looking for in 1620:  a place unfettered by obligations to others.  But from the moment Massasoit decided to become the Pilgrims' ally, New England belonged to no single group.  For peace and for survival, others must be accommodated. The moment any of them gave up on the difficult work of living with their neighbors - and all the compromise, frustration, and delay that inevitably entailed - they risked losing everything.  It was a lesson that Bradford and Massassoit had learned over the course of more than three long decades.

--Nathaniel Philbrick
Mayflower:  A Story of Courage, Community and War
at 7:00 AM 1 comment:

Can Dunwoody Schools Be Independent?

Just when parents think they've seen everything in DeKalb County schools, Central Office comes up with new combinations of arrogance and incompetence to appall them.

No one has any business being surprised that DeKalb cities are looking for alternatives to the county-run public schools.  Communities looking to create start-up charters now have an appeal option with the State if the county-based school board shoots it down.  Arguments for "local control" only work when you're talking about extremely rural counties - which make up the majority of Georgia.  Urban and suburban counties are not going to be served well by a county-based organization.  Every news outlet in Atlanta has proof of that in DeKalb.

So what would it be like if Dunwoody were to take advantage of the ability to create a start-up charter?  This would be more likely to happen in the foreseeable future given the long road to independent school districts, or even charter clusters.

Interested Parent Group (IPG for short) wants to start a new charter elementary school because their current school is overcrowded and doesn't offer the classes the parents want their children to have. These parents want to see a foreign language requirement and guaranteed art, music, and PE.

Let's assume IPG has gone through the charter application process, got shot to hell by DeKalb, appealed to the State and were approved.  They're good to go.

There are three options for raising money.  IPG could apply for grants from major foundations.  Serious paydirt if you're selected but the competition process is long and the results far from certain.  IPG could pass the hat in the Dunwoody community for startup funds.  Also not impossible but how certain are we that our most well-heeled residents would be willing and/or able to write a 7-figure check?  The final option is the most expedient, the most reliable, and was used as a foil by those opposed to the state charter amendment:  private charter school providers.  Here's an example that is active in Michigan charter schools.

Let's say that our IPG has received a grant from a private foundation for startup costs.  Let's also say that they've contracted with a company like the one linked above for management.  Let's say they even found a location:  the stars aligned and, with the startup grant, they purchased the old elementary school site on Shallowford and Chamblee Dunwoody roads and are going to level the current eyesore and construct a new building and grounds.

The story looks like it approaches a happy ending with local growth and control of Dunwoody schools within easy reach of the local community.

The ending can't be that happy and that simple in Dunwoody.

You see, when you contract with a private company to manage your school, then it's no longer just a neighborhood school.

It's "commercial activity in a residential neighborhood."  And we all know what kind of reaction that will get.

Even if IPG managed to get their charter school property zoned as O/I (which is the closest thing the still-in-progress zoning code has to an "educational" use) it still backs up to residential properties.  Get ready for the angry mobs and the threats of lawyers.

The in-progress zoning code does not take into account the possibility off Dunwoody-controlled schools.  Zoning designations only acknowledge PRIVATE schools with lot size requirements.  (5 acres for elementary, 12 acres for middle, 20 acres for high school)  But with no standards for public schools, the loudest mob will win the day.

Dunwoody citizens dance a gleeful jig when their hostility alone blocks a day care facility.  The reaction to a K - 5 school with twice as many students and more activity is likely to be much more severe.  A school district would multiply the conflict further - more schools, more students, more to complain about.  If the reconfiguration of an insignificant side street brings out our worst, how can we expect to accommodate start-up charters?   Or manage a school system so that it can educate all of Dunwoody's children to our very high expectations while dealing with the outcry of those who can't stand having any institution other than their own home "visible from the street"?

The question is:  Can Dunwoody schools be independent?

The answer is no.  They cannot.

It's Always the Quiet Ones

The city of Dunwoody announced a plan to create its own school system, separate from DeKalb County.
The issue came up for discussion at Monday night's city council meeting.

"This is good for all the students of Georgia," Dunwoody council member Terry Nall said.

Nall proposed the idea because he would like to see the city of Dunwoody take back control from the county.

"I moved to add changing the state constitution that would allow municipalities to establish independent school systems. Today over 500 cities in the state of Georgia do not have that choice," Nall said.

Nall said the city council plans to ask state legislators to consider a constitutional amendment that will give cities like Dunwoody a choice when it comes to government schools.

Fritts is in favor of the idea, because she was appalled at the mismanagement of funds in DeKalb County.
"I would like to say we'd have more of a voice for sure and a lot of concerned parents around here are active in the schools and we help with PTA, sports, orchestra, band - we're active," Fritts said.

Fritts, like most parents, had one major concern about Dunwoody establishing its own school system.
"I know that the funding would still be a problem because I know it's a small city, Dunwoody, so we don't know where the money would come from," Fritts said.

So CBS Atlanta News questioned Nall to find out how he financially plans to make his concept a reality.
"Where do you get the funding?" CBS Atlanta reporter Adam Murphy asked.

"Well today we're paying a very healthy millage rate to DeKalb County School system. And like when we became a city, we took the millage rate we were paying to the county in municipal services and applied it and it became the millage rate for the city of Dunwoody for our services. And I would expect a very similar situation to occur if we were to go down that path," Nall said.

This proposal is far from reality. City council members have to get state lawmakers on board and then a majority of the state house and senate would have to approve it.

The Old Arby's in Williamsburg will be replaced by.... 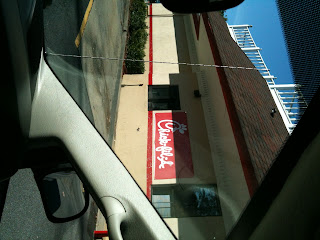 Earlier this year, .I held an officially unofficial poll asking what the community would like to see fill the old Arby's.  After a lot of dancing around with bids submitted then withdrawn and reconsidered, and a long, awkward, silence, the majority of poll voters are getting their wish.  The temporary signs went up this week and the location is expected to start operations by the end of the year.

And there wasn't even a squabble over zoning.

On to the next question.

What would the community like to see replace the New York Butcher Shop that recently closed its Dunwoody location?  (And I am SERIOUSLY pissed about this because they had some of the best custom meat to be found in a neighborhood retail location and I'm not up for trekking all the way over to Sandy Springs for the same items, no matter how addictive their lobster salad, prime tenderloin, and lobster bisque are!)  Of course, if I happen to be in their neighborhood, I'll stop in to feed the addiction. 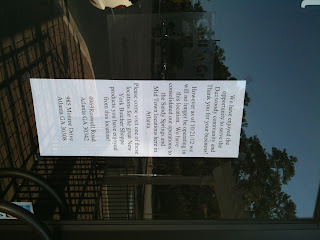 Comments are open.  Considerations for this location:

Forget "Williamsburg".  The structure was built by the franchisees of Java U who thumbed their noses at the architectural standard and built what they liked.

Forget about drive-throughs.  The awkward little triangle has no room for expansion.

Great location for visibility.  Traffic - not so much.

Easily take advantage of marketing to built-in population at All Saints.  Anyone willing to adjust their hours to accommodate Sunday afternoons and evenings should do well.  The site is also poised to participate in the 4th of July parade.

This one is for all of my progressive rock/classic rock fan friends out there.

Effective this morning, SDOC Publishing is providing all development and back-end maintenance services for RikEmmett.com, the official website for former Triumph frontman Rik Emmett in Toronto. 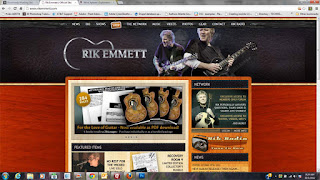 You won't notice any visible changes when you visit.  The current theme by Burning Fire Design will remain.  However I'm climbing down into the back with my digital wrench and doing some major upgrades on the e-Commerce side, with upgraded capabilities for downloadable music and other products, as well as improved functionality for the fan forum and promotional newsletters and assorted other interactive features.  Some time next year, SDOC will provide all hosting services as well.

Helluva way to hit the ground running after Briers North Halloween!  Enjoy!
at 9:51 AM No comments: