Where Is the Human Touch?

I usually write posts on this blog about customers or business in general but today I'm going to be self-indulgent.  Refill your coffee cup and settle in.  This is long.

How many times have you heard an acquaintance or colleague bemoan the lack of courtesy that used to be so common?  It's in every venue.  Some blogs I read describe  kids backtalking teachers - threatening, even, in some cases.  Reality TV has encouraged confrontation rather than conversation.  The immediacy of blogging has generated quick responses.  I work in a medium where every word and every image carries some subconscious meaning.  It's important to choose carefully not just the words you use, but when to use them.  Even whether to use them.

I've been pondering this as I've watched groups of people in my own community use various tools to hash out new problems and old conflicts.  A big controversy at the moment is school redistricting.  Comments are flying fast and furious, electronic signatures appear on Internet petitions as quick as a keystroke.  Is it the Internet causing the intense reactions?  No - it's the basic mammailian instinct to protect one's young from perceived threats.  An instinct older than our species itself with a young medium to communicate it.

Soon after my family relocated to this area a situation arose where a homeowner wanted to change the zoning designation of her property, from residential to commercial.  Zoning is a passionate issue here, as homeowners feel they have had little protection from the government and other business interests over the years.  I'm inclined to agree - the county government looked the other way in many instances while a commercial enterprise flauted the law.  It's a key reason this region became a city.

The person making the request followed every procedure to the letter.  A public hearing w/ extensive notice was required.  A meeting room was secured.  Signs were posted.  Civic groups were notified.  A date and time were set.  I don't think they were prepared for the response they got.

The local community was opposed to the change.  Vehemently so.  Email groups fired up.  Civic group leaders banded together to plan their opposition.  Makeshift uniforms (red shirts) were organized.  This tiny meeting room saw 150 residents packed into it.  I was one of them - new to the area, to these people, to this process.  I agreed that the proposed change was a bad idea.  I still do.  But I have had many, MANY second thoughts over the years about how it was communicated and what kind of "people" we all turned into.

Some residents came prepared (armed?) with facts and figures explaining why the property did not qualify for the redesignation.  Others came with more appropriate recommendations for the type of business the individual wanted to open.  But all of that rational planning was overshadowed by the passion that became overwhelming.  Cheering, clapping, yelling.  "Yeah!  Get em!  Don't oppose us!  Because we'll band together and bring everything we've got to stop you!"  One hundred and fifty people yelling and offering legal threats - and one person facing them alone.   Since that time I tried to imagine myself in that person's position.   If I were the person up there calling this meeting, I would have felt threatened by a lynch mob.  I don't know how she kept from crying.

I wouldn't have thought twice about this at a Braves game.  Pro sports aren't that personal.  But this was.  Everyone involved owned property and wanted to protect it and the local community.  A difference of opinion that could have been discussed calmly became a raving mob.

You'll notice it wasn't the internet.  It was the people.  Live and in person.

Ever since I realized how that scene must have looked, I've tried to be much more careful, in a lot of ways.  Words mean things.

When I see a civic group taking a stand on an issue, I tend to step back.  Is this going to be civil or will there be another mob scene?  I don't know.  I don't want to be a part of a mob.  I certainly don't want to face one alone either.  The same goes for community blogs and online newspapers.  I only recently started posting comments on issues where I feel I have something reasonable to say.  Is it because of the Internet medium and the instant transferral of thought?  No - it's the people involved in it.  The only difference is the location, Internet vs in-person meeting.  The people are no different.

That's a key thing I keep in mind when I'm working on a project.  I've met colleagues and other fellow web technology folks who are so wrapped up in what the machine can do that the needs of the people using it take a back seat.   It takes an enormous amount of effort to ensure that the message one delivers is the same one that gets received.  I think it's worth the effort.  Because we all have to live together.
at 1:02 PM No comments:

This review began some months ago.  Time for an update now that we're snowed in!

Pothole #3:  You still need "face time"
Human beings need social interaction in person.  We thrive on non-verbal communication and are comforted by the sight of a real, live face to speak to.  Make time for networking, in-person meetings, and just socializing offline.  If you telecommute, make a regular in-office schedule for meetings or other followup.  Don't let the powerful communication tool of the internet become the ironic barrier to real personal interaction.

Pothole #4:  Know the Law and Follow It
Working from home either as a telecommuter or a business owner may not be completely up to you.  Your local municipality may have zoning laws that restrict what kind of work may be done in a residence.  For example, in some parts of New York City, business owners may live in the very same building as their storefront.  Or they may even live in their workspace if they have opted for an industrial loft-type of residence.  It's simply expected that work and home often occupy the same space.  On the other side, my community requires additional licensing permits for operating a business from a home; to actually meet customers at home requires a special land use permit from the City Council.
Always check your local municipality's ordinances before you establish your business or begin telecommuting.  It's a lot easier to work within the law - and be a good business neighbor - from the beginning, rather than adjusting later to comply.

Pothole #5:  There Is No Such Thing as Multitasking
Again, put down the torches and pitchforks.  This isn't heresy.
When personal computers evolved in the mid 1990s, companies promoted their capabilities as "multitasking" - the ability to run more than one program at a time.  That wasn't exactly true.  The computer was fast enough to run a series of steps in a program in sequence so quickly that it seemed to be doing them all at one time.  But they really didn't.  The computer just did one thing at a time, very quickly.
People are the same way.  When you try to balance multiple tasks in exactly the same moment, something gets dropped.  You can avoid this by simply putting your tasks in order and running through them one at a time.  Not only will you get your work done faster and more efficiently, you won't feel overwhelmed and exhausted all the time.

Pothole #6:  Get Dressed
How many times have you seen an online program advertised on TV, claiming how wonderful it is to work or attend school from home because you can lie around in your pajamas all day?  It sounds wonderful - lounge and work at the same time.  That will last about a week, at most.
Whether you work at an office or at home, it takes effort to get your mindset focused on the job.  Getting dressed in "work clothes" goes a long way to set the tone for your work, even at home.  Whether it's business formal, business casual, or some type of uniform, if you look professional, you'll be professional.  That starts with your senses before anyone else sees you.

Anyone else have experiences in making working from home productive?  Leave a comment!
at 3:02 AM No comments:

I just got a sneak peek at the new City of Dunwoody website. It looks amazingly similar to the current Dunwoody Chamber of Commerce website!!! There could be legal implications to that "similarity" but I'll sit back and take the credit for creating something so usable that other, larger companies want to replicate it. ;-)

I was asked to keep the new City logo confidential, before it is revealed this Saturday evening at the Dunwoody Music Festival.  So for that reason I'm not linking to the new City website page.

But to give you an idea, take a look at the Chamber of Commerce page: 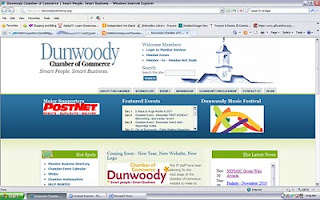 And here's a screenshot with the sensitive parts edited out. 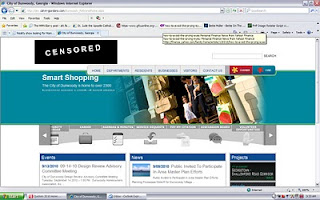 They have lots in common, don't they?

The company contracted to create the new logo and website is Calvin, Giordano, and Associates out of Fort Lauderdale, FL.  Not exactly Dunwoody natives, but I'll let City Hall explain why they went out of state for this job when there are plenty of developers right here in town capable and willing to do a job for local government.

Evidently, Calvin et al know a good thing when they see it!  Pardon me while I pat myself on the back.

UPDATE:
Just got an update. Calvin, Giordano, & Assoc do not have a website department. They do have an employee in their city planning function that creates websites as a hobby.

It's hard to fault any entity for trying to find the least financially expensive alternative for a job, especially when dealing with taxpayer money.
HOWEVER - the irony is the Dunwoody Economic Development Director Michael Starling (email: michael.starling@dunwoodyga.gov) is in a job that encourages businesses to start up here and stay here and for customers to buy Dunwoody goods and services.

Off the top of my head I can think of five other website development firms operating inside of city limits who would have been happy to take a government job. I bet they would have been much more creative than just lifting the color and layout scheme that the Chamber of Commerce was already using. The City wants to reap the benefits of a business community, yet to date they will not lead by example.