Commissioners Elaine Boyer, Stan Watson & Sharon Barnes Sutton have joined forces to host an event on Sunday, May 20th from 5:00 PM until 7:00 PM to help fund a spay/neuter program for pets of DeKalb families in need of assistance. The event is at Stars & Strikes in Stone Mountain & will include activities such as bowling, laser tag, bumper cars, video games, etc.

There are several ways you can help:

There is much to be done to reverse the horrible situation at DeKalb Animal Services & this is a step in that direction. To help get a handle on the massive number of animals euthanized annually in DeKalb (approximately 5,000) we need to educate the public more and provide assistance to those who have good intentions, but cannot afford to fix their pets. After hearing from many concerned constituents at the commission meetings and reading the influx of emails, Commissioner Boyer wanted to do something to help. She consulted with several members of the Animal Services Task Force and the head of Animal Services and the consensus was that a spay/neuter program would go the furthest to help raise awareness and slow the inflow of animals into the shelter. The program will be implemented through LifeLine Animal Project, who is our partneron this endeavor.

Print the flyer below for more info, including sponsorship opportunities.

(Here ya go, Twinkletoes Bob!)   All of the pets I've ever had (including my current ones) have all been rescued strays so I'm glad to lend some PR for this event.
at 1:58 PM 2 comments:

It's right next to (what used to be) Dunwoody Pediatrics.

Here's the page with job application info.  Apparently they like to do things offline so you can print out an application from this page, or ask for one at the store in person.

Now I just have to convince my three munchkins that having ice cream in a store like this is just as good as chasing the ice cream truck down the street.  ;-)
at 6:03 PM No comments:

Rumor Has It...Not Everything Belongs on the Internet 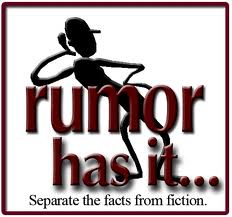 If there is anything we have learned from the explosion of the Internet in 1995, it's that no matter how much technology is created, people - human beings - don't change.

The utopian ideal promoted when email services began, both at home and at work, was that faster communication would make the world "smaller" and make it easier to share ideas and information.

However, not all ideas are benign and not all information is reliable.  It is the human part of us that has to discern the difference.  Then that same human part has to decide whether and how to distribute it.  That requires turning off the machines.

My old medical research job trained me for that kind of discernment.  All of us in hands-on clinical research were required to take an intensive seminar in medical ethics with an extensive history component.

The VP of Translational Research, who was always the "go to" person for international media contacts, summed it up thusly:  "If you're not sure about whether a decision is right, whether it's in research, or a pharmaceutical company in your stock portfolio, think about how it will look on the front page of the New York Times.  Because that is where it is going to end up."

Take Facebook for example.  Read their terms of service some time.  Everything you post on Facebook, they own and can do with it whatever they wish.  Some acquaintances who have been working with Facebook's marketing leadership had some disturbing opinions about them.  Such as "generation y-ers who have all of this data and little idea what to do with it and shaky ethics on the best of days."

Google seems to be more benign - they don't claim ownership to any posted content.  But they have streamlined the cross-referencing of content across platforms (Google Checkout, YouTube, Blogger, etc)  So they may not claim ownership but they've made it easy for someone else to exploit what you add to it.  I'm not one for conspiracy theories but that one scares the hell out of me.

So when the Internet is used to transmit evolving information - especially in legal cases - the consequences can be more severe.  The ability to be objective and treat all parties fairly fades.  There is potential to violate civil rights.  Notice it's not the machines that make information more deadly - it's the people using them.  People using machines rather than their own discretion and the oft-ignored "Power" button.

No one is going to be served best by manipulating evolving information on this case on the Internet.  Within moments of John posting the agenda item (with no commentary, just the text of the resolution) there was speculation on the reason for the resolution (which was confirmed at last night's meeting) and conclusions drawn that the City Attorney had already been fired (which was untrue.)  See how fast a single fact was spun out of control?

I'm not going to opine over who to trust, because I still don't know.  I'm not privy to the facts involved, by choice.  But I do think this is one for the human beings to work out in real time, with face-to-face consequences, to protect the rights of all involved and leave the machines out of it.  Use some human discretion and the "Power" key, at least until the scenario has played out.

(Good commentary from Kerry DeVallette on this issue last night.  He points out some reasons that I think this process should remain offline.)
at 11:12 AM 1 comment: