May has been one busy month.

Tom asked me to recreate his website back in November 2015 when initial plans were being laid for his reelection campaign.

This updated WordPress version launched at the beginning of May 2016.  The responsive design was a traditional American political approach.  The content was formatted to highlight Tom's voting and bill promotion record during his previous time in the House, his record of community support prior to taking the District 79 seat for the first time, plus other commentary as needed.

So why am I talking about this "new" website a month after launch?

Due to the news coverage of Tom's arrest and subsequent legal questions, this was not a typical election season.  Every focus of this website, plus the social media that I also managed, had to be on Tom's record.  Any distraction could diminish the results.  Plus, the opponent in this campaign has a history of aggressive and even violent behaviour and his political supporters weren't much better.  Personal safety procedures, both online and real life, were not afterthoughts.

When anyone of any profession chooses to get into a supportive role in politics or government, it's smart to count the cost beforehand.  I went through this same process when I worked for Nancy Jester's campaign and subsequent Commissioner's websites and former Councilwoman Adrian Bonser's site.  When it comes to building a website and/or managing social media, I work for the official or candidate.  But in the rest of reality and the universe, they work for me as my elected representative.   When everything is going smoothly, that dichotomy is no big deal.  You don't even notice it.  But when there is a legal conflict or problem, it gets complicated.

I resolved it by compartmentalizing my opinions and feelings where the legal issues were concerned from my technical skill and expertise on websites.  That's a skill I picked up while working in oncology research back in the day when I had to turn my feelings off to work with cancer patients in one study or another.    Your reactivate your feelings and process them later when the job is done.

In politics and government, there are going to be legal problems and conflicts.  It's an inevitable nature of the beast.  It's OK if a professional decides they don't want to handle it.  But you make that decision BEFORE you take a job, not after.  I kept my commitment to Tom that I had made 6 months prior to the election getting hot and heavy.  I keep my commitments to all of my clients in the same way.
at 10:22 AM No comments:

Today in DeKalb we have a primary election for State House and Senate seats, and a special election for Tax Commissioner.  You've seen the signs all over Dunwoody and you've probably already found the websites and social media so I trust most people reading this have made up their minds.  Now make it count in the booth.  Your opinion doesn't help if it isn't recorded on a ballot.

We also have a vote on (yet another...) E-SPLOST.  The one you heard about in the news where Superintendent Green wants you to approve the money first, then tell you what it's going to be spent on later.

Compounding this backward planing was a DeKalb Schools robo call last night that was supposed to be merely informative, yet claimed that voting in favor of E-SPLOST would result in capital improvements to "your" childrens' school.

The contradictions are obvious to citizens, but apparently not to most of the school board or to Dr. Green so let's spell them out.

1)  The appeal to improving "your" child's school is bogus without a project list.

2)  The call was made using the DCSS' automated calling system - the same one used to distribute weather closing alerts and requests to follow up on truancy reports if your child is late or absent.  That means tax money was used to persuade parents to vote a certain outcome in the election.  That's illegal, kiddos, but since when has that stopped you before?

I'm headed out to Crossroads Baptist as soon as the garbage is on the curb and my cup of coffee is down.  Every vote counts and every person has an impact today.
at 7:30 AM No comments:

Shout huzzahs from on high - the water mains are replaced, the roads are smoothed, the Chamblee-Dunwoody washboard is (almost) gone and new asphalt is down.  Paint is in progress.

Mt Vernon is now a road capable of the traffic it carries and no longer a glorified cow path. 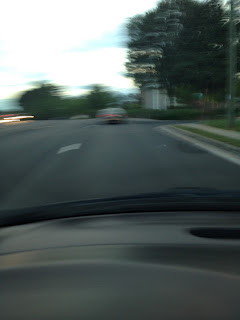 To some people the most important parts of the road are the 3-4 feet at the edge on either side.

This one's for you!