Taste of Dunwoody 2012 is SOLD OUT

UPDATE:  TASTE OF DUNWOODY 2012 IS SOLD OUT
Let the scalping ticket brokering begin....

Back again for the 9th year in a row is Taste of Dunwoody to benefit Children's Healthcare of Atlanta.  Once again, SDOC is sponsoring the event and my husband and I can't wait for February 3!

Get tickets now.  No really, drop what you're doing, get your wallet, go here, and get tickets.  Back in early December, the event was 25% sold.  It has got to be more than that now.  Last year people thought they could buy tickets the day of or at the door and were shut out.  There were networks of people springing up looking to buy or sell.  Avoid the rush.

Taste of Dunwoody is produced by Dunwoody Friends of CHOA.  All Dunwoody moms and dads, organizing fundraising for all of the funding gaps every pediatric hospital faces.  Check them out on Facebook.  (And if any of the admins from this page are reading - update your info slide, it's about a year out of date.  8^P )  Share the TOD.  Share the FB event info too.

Last year I posted why CHOA fundraisers and support events are so near and dear to us.  Can't think of anything that has changed since then.  Some of you didn't believe my comment about working at the cancer kids' summer camp.  So I dug around and pulled out the camp group picture: 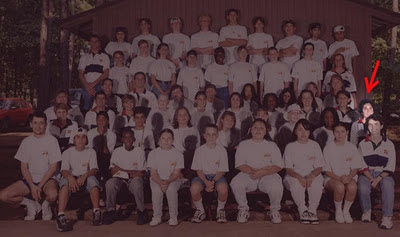 The counselors in their rugby shirts are around the edges and our patients with their siblings are in the middle.  That's one of the official group shots of Camp AOK ("Anderson's Older Kids") around 1995-ish.  It was 103 degrees in the shade and we all had sweat in places we don't discuss in polite company.  The photo was taken the first night of camp after the campers arrived and got settled.  I was the co-counselor of "Cool Chicks Only" cabin.

This summer camp was exactly like any other.  Except the camp nurse was a certified nurse practitioner with an oncology specialty and had to organize maintenance chemotherapy regiments for half of the campers.  Usually that just meant medication in pill form.  A pediatric oncologist was on site at all times.  The guys in the clinic fought over who got up to camp for the week.  The child life specialists (psychology team) sat with the counselors before arrival to discuss each of the campers - who was back this year, who was new, who would never be back again.  These teens saw life and death first hand more than many people do.  Child Life  was always on hand to allow them to talk out their feelings and cope with their own well-founded fears of their own mortality.  That was also the reason for "summer prom":  some of these kids did not live to see their high school senior prom.  But most of the teens in this picture are healthy adults today.

The support programs provided by CHOA through private donations and sponsors are similar to what I have worked with in the past.  Medical care is only the beginning.  For children with serious health issues and their families there's a lot of work involved in finding a new "normal life".  This is what Taste of Dunwoody and other Friends' events are paying for.  Taste of Dunwoody is a lot more than just a party!