C. S. Lewis is most famous for the "Chronicles of Narnia" series of books, starting with "The Lion, the Witch and the Wardrobe."  However he wrote several other novels based on Christian theological themes.

One of his lesser-known is "The Great Divorce".  It was originally written as a serial in a UK newspaper in the mid 1940s, then published as a book, adapted as a play, and there are rumors of a film adaptation in the near future.

Like his other novels, "Divorce" is a fantasy.  The story opens with a group of people waiting at a bus stop.  Not just any bus stop.  This one is in Hell.  The people are waiting for a bus ride to Heaven.

The group is a bunch of grumbling malcontents who are not capable of being happy.  Of course, you wouldn't expect anyone to be happy in Hell.  Their bus reaches its destination.  The opening chapters describe a green paradise of eternal cool summer morning.  The residents are bright white figures.  However the bus riders are oily ghosts who are so insubstantial, even the blades of grass pierce their feet.

They escape Hell.  They arrive in Heaven.  Others urge them to stay and enjoy eternity. 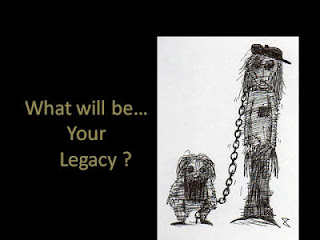 How could anyone hate Heaven?  The answers came in the stories of each of the "ghosts" as they explored and interacted with others they knew on Earth and died like them, but went to Heaven instead.  The "diverse" bus company included an apostate pastor, a bitter conspiracy theorist/pessimist, a vain old woman obsessed with her appearance, and several self-possessed drama-queens who never realized how miserable they made their families.  They were each so wrapped up in themselves that Heaven was a miserable place and most of them returned to Hell.

I saw coming towards us a Ghost who carried something on his shoulder.  Like all the Ghosts, he was unsubstantial....What sat on his shoulder was a little red lizard, and it was twitching its tail like a whip and whispering things in his ear.  As we caught sight of him he turned his head to the reptile with a snarl of impatience....It wagged its tail and continued to whisper to him.  He ceased snarling, and presently began to smile.  Then he turned and started to limp westward, away from the Mountains.

The speaker was more or less human in shape but larger ahn a man and so bright that I could hardly look at him.  His presence smote on my eyes and on my body too like the morning sun at the beginning of a tyrannous summer day.

"Yes, I'm off," said the Ghost.  "Thanks for all your hospitality.  But it's no good, you see.  I told this little chap...that he'd have to be quiet if he came - which he insisted on doing.  Of course hsit stuff won't do here:  I realise that.  But he won't stop.  I shall just have to go home."

"Would you like me to make him quiet?" said the flaming Spirit - an angel, as I now understood.

"Of course I would," said the Ghost.

"Then I will kill him, "said the Angel, taking a step forward.

"Don't you want him killed?"

"You didn't say anything about killing him at first.  I hardly meant to bother you with anything so drastic as that."

"It's the only way," said the Angel, whose burning hands were now very close to the lizard.  "Shall I kill it?"

..."Honestly,  I don't think there's the slightest necessity for that.  I'm sure I shall be able to keep it in order now.  I think the gradual process would be far better than killing it."

"The gradual process is of no use at all."

"If you wanted to help me, why didn't you kill the damned thing without asking me - before I knew?  It would be all over by now if you had."

"I cannot kill it against your will.  It is impossible.  Have I your permission?" 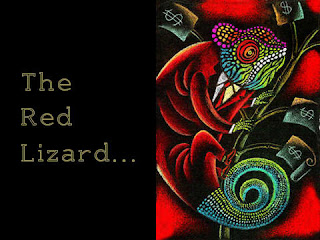 Then the Lizard began chattering to the Ghost so loud that even I could hear what it was saying.

"Be careful," it said.  "He can do what he says.  He can kill me.  One fatal word from you and he will!  Then you'll be without me for ever and ever.  It's not natural.  How could you live?  You'd be only a sort of ghost, not a real man as you are now.  He doesn't understand.  He's only a cold, bloodless abstract thing....I admit I've sometimes gone too far in the past, but I promise I won't do it again.  I'll give you nothing but really nice dreams...."

"Have I your permission?" said the Angel to the Ghost.

And with that, the Angel destroyed the Demon whispering in the soul's ear.  The former Ghost became a saint and Heaven rejoiced as he entered.

In any community, including ours, there are a lot of little demonic lizards, sitting on a lot of shoulders, whispering in a lot of ears, reinforcing the comfortable fears that make even neighbors distrust each other.  To be happy, you have to choose to kill the fear.
at 11:08 PM