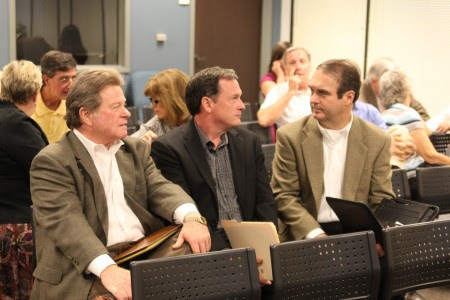 What makes these new entries interesting is that this is the first time an "official" self-proclaimed slate has run for city office.  In our first elections, the people who ran (or were asked to take an office) were already heavily involved in the formation of the city and had the background and tools readily available to step into their new roles as a startup.  It wasn't a surprise that they knew each other and had some history working together to some extent, especially since 46K is still considered a "small town".  You can't help but run across someone you know in politics or business.

Now that Dunwoody is better established and has some history behind it, the pool of candidates and approach to campaigns and offices is evolving.  There had to be some planning that went in to this to find candidates who qualified for each of the three districts and were like-thinking enough to run as a group.  These three gentlemen claim they are not involved in any of the major established organizations or recently-aggregated advocacy groups in Dunwoody, so time will tell what their connections really are.

And with as many news outlets, mailing lists, and bloggers out there, we *will* find out, guys....  if there's anything in the closet, clean it out now.  Don't forget to behave yourselves.  Contenders who seem to be publicly getting involved with the city for the very first time will have every move under scrutiny and a moment's indiscretion can derail your plans.  Ask Ellen Fix if you doubt it.

First question asked by any interviewer is going to be:  what have you done as part of Dunwoody before now?  Which leads into qualifications for office, etc.  And if they are distancing themselves from the Chamber, from the DHA and other groups, how are they going to work with these and other advocacy groups if they are elected?

District 2 (Central)
Heyward Wescott
Jim Riticher
(Blog created with Riticher's name above, can't tell if it's real or a spoof)
Then we have this little gem.  Given the neighborhood I live in and what it looks like on October 31, as well as my past history of frequenting sci fi and comic cons, I'm not going to pass judgement on costumes in public. 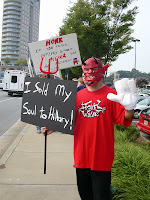 I just got around to watching the video from last night's council meeting. (On YouTube from John H: http://www.youtube.com/watch?v=EqgLx35dX-A)

At the end of the meeting, Heyward Wescott made a point during public comment to point out that the gentlemen who announced their candidacy at the first open comment period left the room after doing so instead of staying for the meeting.

Remember what I said about every move being under scrutiny? I wasn't kidding, gang.... Stuff like this gets remembered. As does anything that might smack of negative campaigning. ;-)

I am disappointed that it took you that long to notice that Heyward point out the obvious :-)

There can be no negative campaigning yet as the trio is on a two-week holiday/quiet period, whatever that means. Why not wait two weeks then announce?