A Woman For All Seasons

In midterm elections like this, especially in local races, every vote counts.

Every vote can make a difference in an election.  That means yes, it does matter whether or not you go to the polls today.  No one is predicting a landslide in any of the races, so the decisions are not already made.  God knows no one wants a runoff and another month-and-a-half of robocalls and political ads that intrude on the holidays.

There don't have to be runoffs if everyone registered takes ten minutes to cast their ballots.

I'm heading to the poll myself as soon as I get my last child on the school bus.

There aren't too many people for whom I lend support 100% - not even some friends who I respect in day to day life.  Nancy has earned that support from me and my family for two simple reasons:

2)  She's willing to tell the truth even if she has to stand alone and take the slings and arrows while others scurry for cover.

That leaves one option.  If everyone votes for the best candidate, there doesn't have to be a runoff. 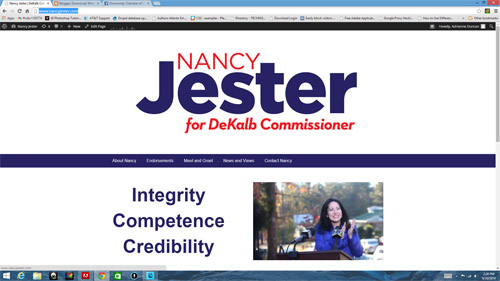 I hope you are hearing good numbers. At DES precinct Nancy was in the 300s and Butler and Danese were in the 100s. What surprised me was that the other two were in double digits, totaling maybe 100 out of 824 ballots cast. Will be a runoff for sure. Go Nancy!