More Dunwoody Than You - The Next Generation

More of that "family" sense that Mayor Shortal was talking about during the State of the City.

This screenshot was taken from Stan Jester's blog.  The discussion is regarding questions about a new group that apparently has succeeded the old Dunwoody-Chamblee Parents Council. 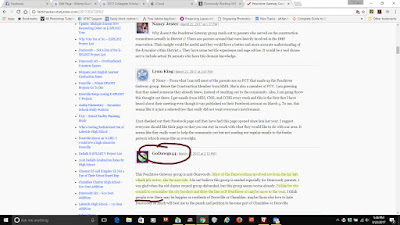 Most of the Dunwoodians involved are from the far-left whack job sector, aka the east side.

I’d like for city council to reconsider the city borders and draw the line at N Peachtree or maybe more to the west. I think people over there may be happier as residents of Doraville or Chamblee.


The next time Districts 1 and 2 need support on a city initiative, or zoning, or whatever comes up (like the Dunwoody Club Forest rezoning or the Manget Way group home conflict) I'm going to whip this sucker out and remind the mouthpiece that elements of their community think the "whack job sector" isn't "really" Dunwoody....
at 6:32 PM