Election results from Dunwoody Patch
at 3:37 PM No comments:

From Independent We Stand:
There must be some Dunwoody business owner out there who has a unique perspective on this question.

A reporter from a major news publication has approached Independent We Stand looking for business owners to interview for an article about the fines that small businesses often have to pay when they break city or state rules. Interested business owners should be able to speak to some or all of the following:

Is it tough for small business owners to keep up with the different rules they need to follow?

Are some unnecessary or over-the-top?

Are the fines for outrageous amounts, or amounts that are just too high for the average small shop?

On the flip side, are there any positives to city/state rules for running a business, like perhaps they prevent competitors from getting an unfair advantage?

Do you feel like you can speak to these questions? If so, just reply to this email or email us at media@independentwestand.org. But hurry as the reporter needs business owners to interview by today. This is one of the biggest business publications in the world and well worth your time if your are included in the final article.
at 3:54 PM 1 comment:

Dunwoody Branded Signage pt 2: "What Would YOU Do?"

For the most part, very few people hated the concepts outright.  Most in attendance, myself included, said they were essentially on the right track, just tweak the designs to make them more "homey".  I specifically said to use the materials and standards of monument signage in Dunwoody Village.

Given the feedback I can't explain why the same proposal, without any modifications at all, made its way to City Council and execution at the hands of public opinion.

The wayfinding street signage didn't get as much objection:  I'm betting because they are smaller, simpler, and wherever you are people expect a sleek and simple street sign.

The park monument signage (which will set the pace for similar signs for other municipal spaces - City Hall, Police Precinct, possible Fire Department) was problematic.  When you get beyond the purely subjective and emotional adjectives (ugly, etc) you drill down to the root, spelled out in the initial Branding Research Results from November 2010. Page 13 (within the document, after the TOC and cover, not the PDF page) asked "Would you like Dunwoody's image to reflect MOST..." then there was a forced choice between Past, Present, Future, and Other.  There was no "check all that apply".  Most of the comments associated with the "Other" choice indicated that there should be a combination between all three options.  So if you combine the "Other" and "Past" votes from the pie graph, that's about 25% of respondents with this preference.  It's a minority, but a significant one.

So the "branding project" came up with a modern-style set of logos and color combinations - which works because the majority of respondents expressed a preference for a current or futuristic "look".  It works on the web and on stationery, flyers, etc.  But when it comes to a physical monument, something that people will refer to as a landmark and think of in context with the community itself, that "significant minority" kicks in.  There are still a lot of traditional aspects to Dunwoody's collective thinking that deserve to be represented.  IMHO, these monument signs are the way to incorporate all three elements. 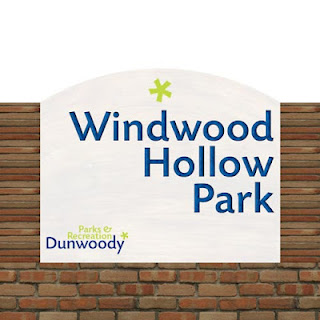 So this is what I think would work.    This assumes that City Hall is sticking with the branding plan as-is without any modifications.

Stick with material combinations that have been a Dunwoody tradition and are incorporated throughout smaller shopping areas in the Village overlay district, and even in the revived Georgtown Shopping Center entrance.  Brick (or stone) monument base and frame.  Painted wood (or composite facsimile if that can require less maintenance).  Engrave the text/images into the surface.  Double-sided, of course.

Keep the font, the colors, the alignment that are consistent with the logo.  Maybe even adjust the line height, width, kerning, etc to match what the logo was created with.  Instead of a giant asterisk (which was the one thing that did the most to turn off the focus group) scale the thing back and make it a small accent.  Still visible, still consistent, still an element that reinforces that this marks a city property, just not as a primary element that distracts the viewer from the actual content.

Speaking of scaling back, the original signs were about 8 foot square.  5-foot square would do the job for most of the parks and future municipal spaces.  The only park monument that would need to be larger is Brook Run - not only to match the size of the park itself but to leave room for changeable panels to announce events, etc.  (BTW - Rick, you're not the only one who hates the Concrete Monolith.  Lots of (half) joking suggestions about backing a Public Works pickup truck into it a few times.  I'm of half a mind to do naked cartwheels around the park boundary the day that ugly thing comes down.)

Put the Parks & Rec variation of the city logo in the corner for balance.  Maybe even put the street address in that space underneath the site name.  Lose the tagline for signage - that crosses the line into clutter.

Here's my concept for "Gateway" markers.

Same idea with a low profile.  Again, keep it to 5-feet high, maybe increase the width to 8 feet or whatever is proportional.

Same structural elements as above.  It can be made into a low enough profile to be used at the Winters' Chapel/Peeler intersection without blocking views.  Or, if that little triangle can't handle a monument sign, try installing it on the stone retaining wall around Dunwoody Point shopping center.  Scale it up for major gateways like Georgetown, Mount Vernon, Ashford-Dunwoody, etc.

Most of all, this isn't brand new and untried.  This type of monument signage has been used throughout the Village overlay district to convey commercial identities while keeping the sense of community from changing to fast.

Thanks for reading with me while I got this out of my system.  Have a good night!