I saw a DeKalb County truck lifting piles of branches off the curb on Tilly Mill this afternoon.  Debris of that size and amount requires a specialized crane-equipped truck.  I've heard some grumbling about how long it has taken for DeKalb to remove the storm-damaged trees.  However, you'll probably be surprised to know that removing debris of that magnitude is not covered by our regular trash fees.  The crews on the trucks need your help and cooperation in removing whatever fell during that storm.

Storm Debris Pick-Up
The City has reached out to DeKalb County Sanitation Department regarding the remaining storm debris.

The county will pick up the debris from the storms. However, the limbs, sticks, and leaves must be properly prepared for pickup.
Standard Pick-up:
1. Limbs should be cut into 4-foot or shorter lengths
2. Tied and bundled or placed in proper containers
a. Approved containers include durable metal and plastic containers or durable biodegradable paper bags
3. Weight may not exceed 50 lbs
4. Call DeKalb Sanitation at (404) 294-2900 if there are large piles of yard debris at the curbside not meeting the restrictions, or if your yard debris has not been serviced on the scheduled day by 2:00 p.m.
Special Collection:
Special collection services are provided for a fee to residents to properly dispose of yard waste that is unbundled or cannot be lifted by hand and other large debris items. These special items are collected using specialized vehicles and are not included in the annual residential assessments. For scheduling call DeKalb Sanitation at (404) 294-2900.
You can visit the DeKalb Sanitation website at http://www.co.dekalb.ga.us/publicwrks/sanitation/san_Residential_Special_Pickup.html
You can also contact them by email at sanitation@co.dekalb.ga.us.

While on the topic of trash, be mindful of what you put out on the curb twice a week.  There's a perception that anything you put out, DeKalb Sanitation will pick up.  Not only is this not accurate (paint cans come to mind...) but it can be downright dangerous. 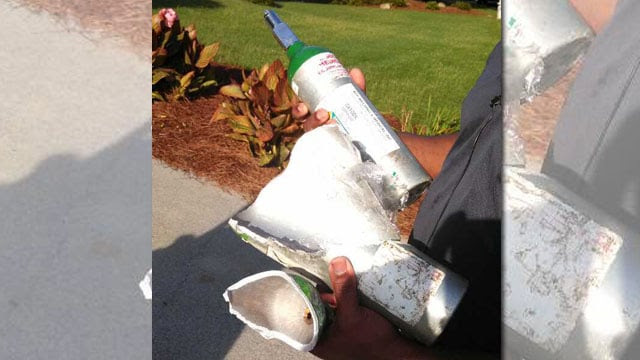 MARIETTA, GA (CBS ATLANTA) -
Two people were injured Friday morning, when a discarded oxygen tank dumped into a garbage truck exploded.
It happened around 8 a.m. on Brentwood Drive in Marietta.
William Smith sustained serious injuries to both eyes, and was taken to Wellstar Kennestone Hospital. He saw an eye specialist on Friday afternoon. Marvin Markham suffered a laceration to the cheek, and was treated at the scene.
It's something the two sanitation workers on their normal route did not expect.
"I heard it, it woke me up," neighbor Eva Board said.
A neighbor put two oxygen tanks out with the trash. One exploded.
"There was like an explosion. It was literally like a bomb," neighbor Freda Heyen said.

Pieces of debris flew as far as four houses away. Supervisor David Tiggs said this is a reminder of the danger of the job.
"It could have been a little bit more, it could have been the loss of an eye, but we ask homeowners to call us and notify us when they have items such as this, so we can tell them how to dispose of it properly," said Cobb County Sanitation Supervisor David Tiggs.
Police said the oxygen tanks came from a home where a woman recently passed away. Her son, in from out of town, pulled up as CBS Atlanta was on the scene.
"I had cleaners come through, and I'm not sure what was put in the trash bags that I took out," Justin Schmidt said.
As soon as he learned someone was injured, Schmidt said, "I got to get down there. I've got to go to the hospital."
Neighbors hope this serves as a reminder for everyone to be careful what you throw out.
"It is very scary. These gentlemen do us a great service, and we need to take care of them, and be responsible and think about what we put out at our curbs," Heyen said.

Sanitation is one of the few departments that DeKalb gets right.  The crews on the trucks deserve some consideration from us to stay safe on their routes.
at 8:06 PM