The Crowne Plaza Ravinia should be the official home of Taste of Dunwoody from this moment onward.  The larger venue and more parking allowed for more mingling, more eating, more dancing, and less feeling cramped.  It was a almost-miss-people-you-know-because-you-rarely-see-them-dressed-and-made-up (sorry Amy....) and  party-until-you-fall-asleep-in-your-makeup kind of night.

As the night got started the sponsors gathered in front of the stage with Yacht Rock Revue for a group photo.

(Jill....  Thanks for following up on that photo.  This is where it's going!)

Food highlights, because I arrived hungry.  (If I make a mistake with the restaurant names or can't remember one, someone post a correction in the comments)

The theme of the night was ahi tuna - many restaurants presented a variation including tuna tartare on fried plantains, seared ahi, and Legal Sea Foods had a tuna sashimi with pickled greens and ginger.

Most unusual sampling of the night that was still successful and unlikely to incite someone like Gordon Ramsay into a profanity-riddled rage goes to the salmon sashimi with chocolate (!) basalmic dressing and micro greens.  (Yes, I tasted it, it worked, it was creative, amazing and I went back for seconds and thirds.)

Best Chowder - do you have to ask?  (Legal Sea Foods)

Most Deliciously Evil:  the deep-fried lobster and gouda nuggets, which was next door to Cafe Intermezzo's Oreo Cookie Cheesecake.

My three kids are the pickiest eaters on the planet so any night with creative food is a night in paradise.

Now for the visuals: 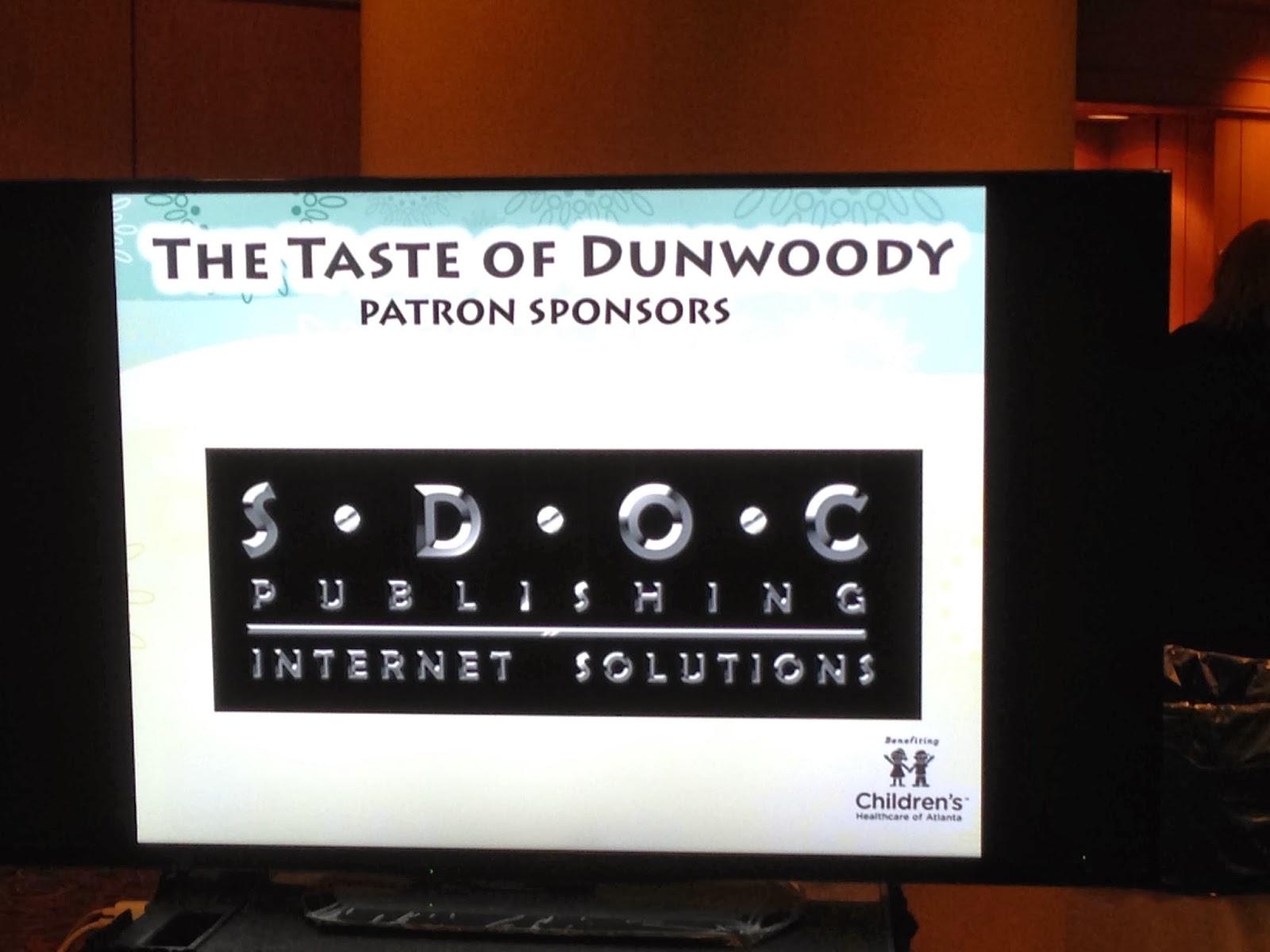 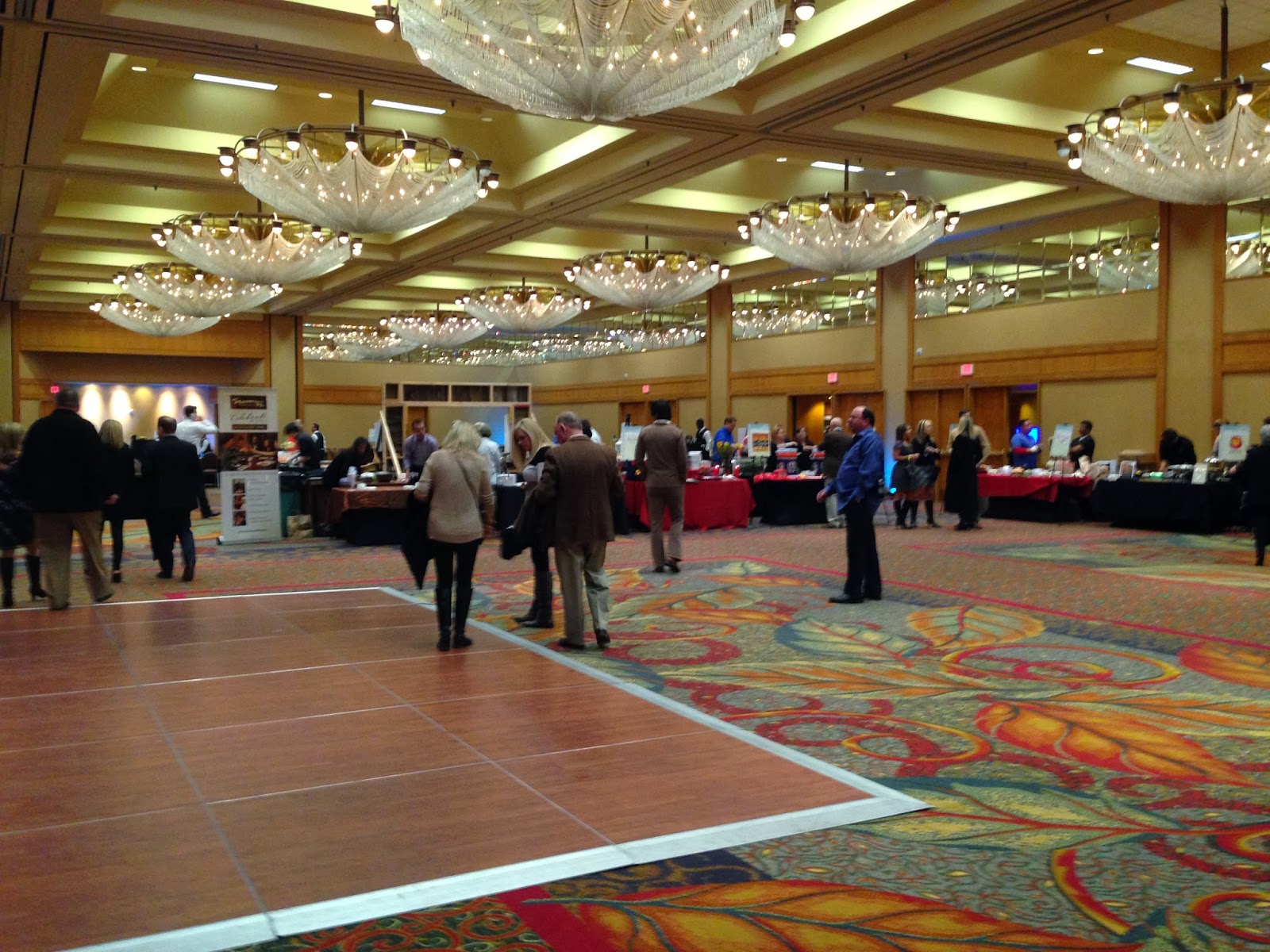 The night begins!  Prime time for the best sampling when the doors are now open to the public and dinner is served.  Get used to this ballroom:  the State of the City will be delivered here in March. 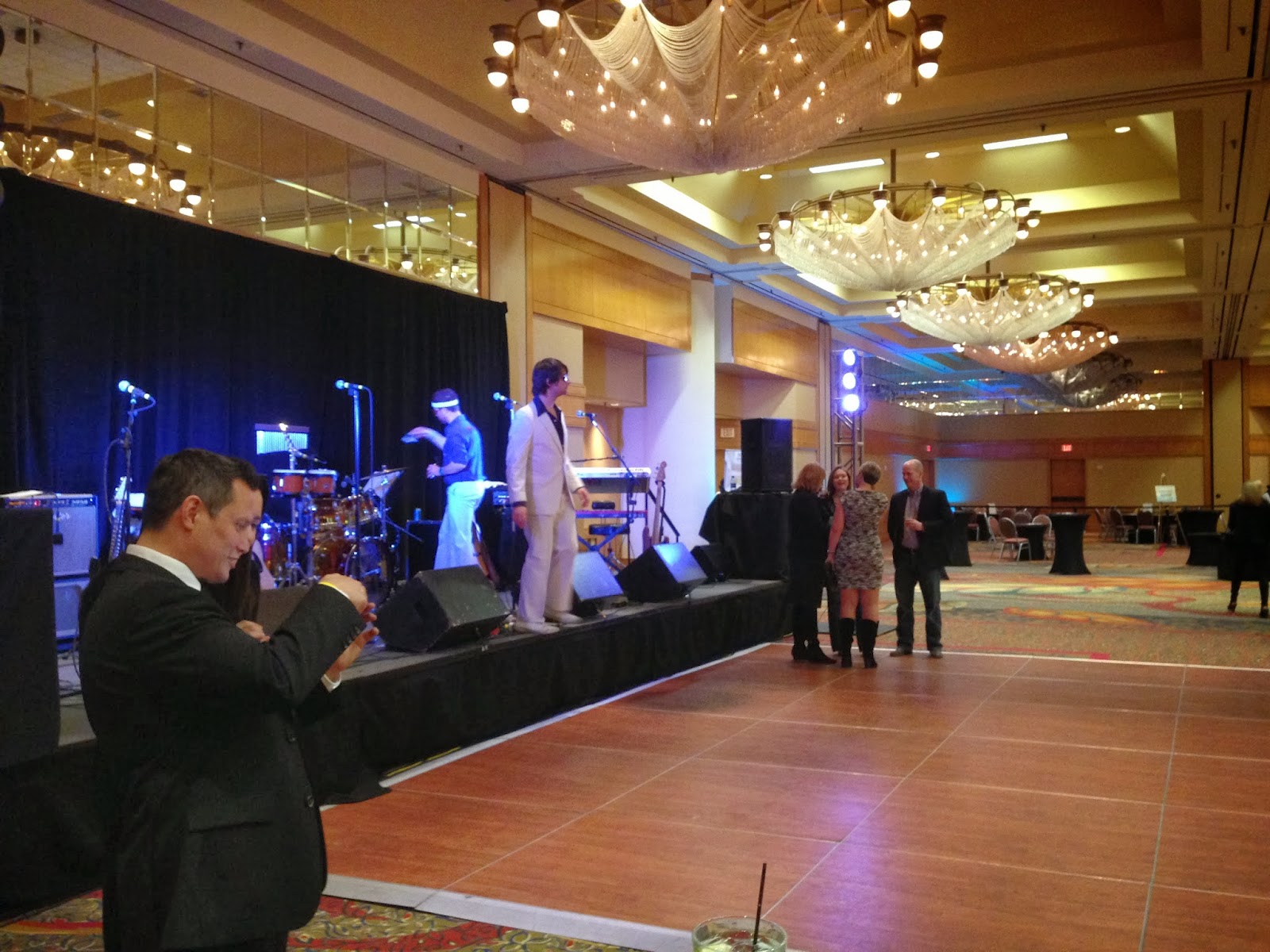 Sound check must have been earlier in the day.  Yacht Rock showed up in their performance duds and we all got to mingle before they took the stage at 8 PM. 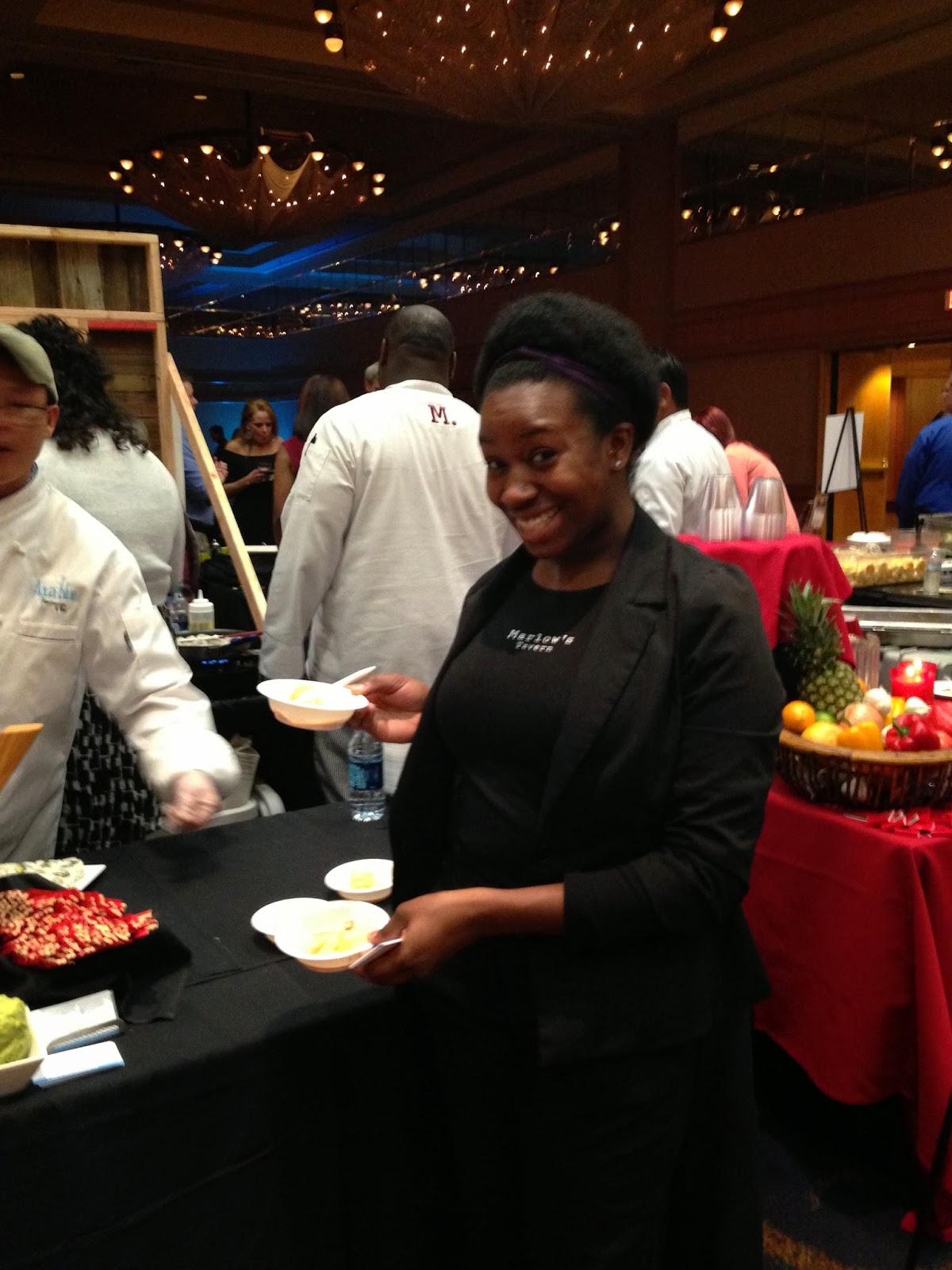 Smile for the blog!  A rep from Marlow's shows off Shrimp and Grits.  I took this picture with sauce dripping from my chin.  (Psst - Marlow's has a coupon deal for Chamber members.  Don't miss it!) 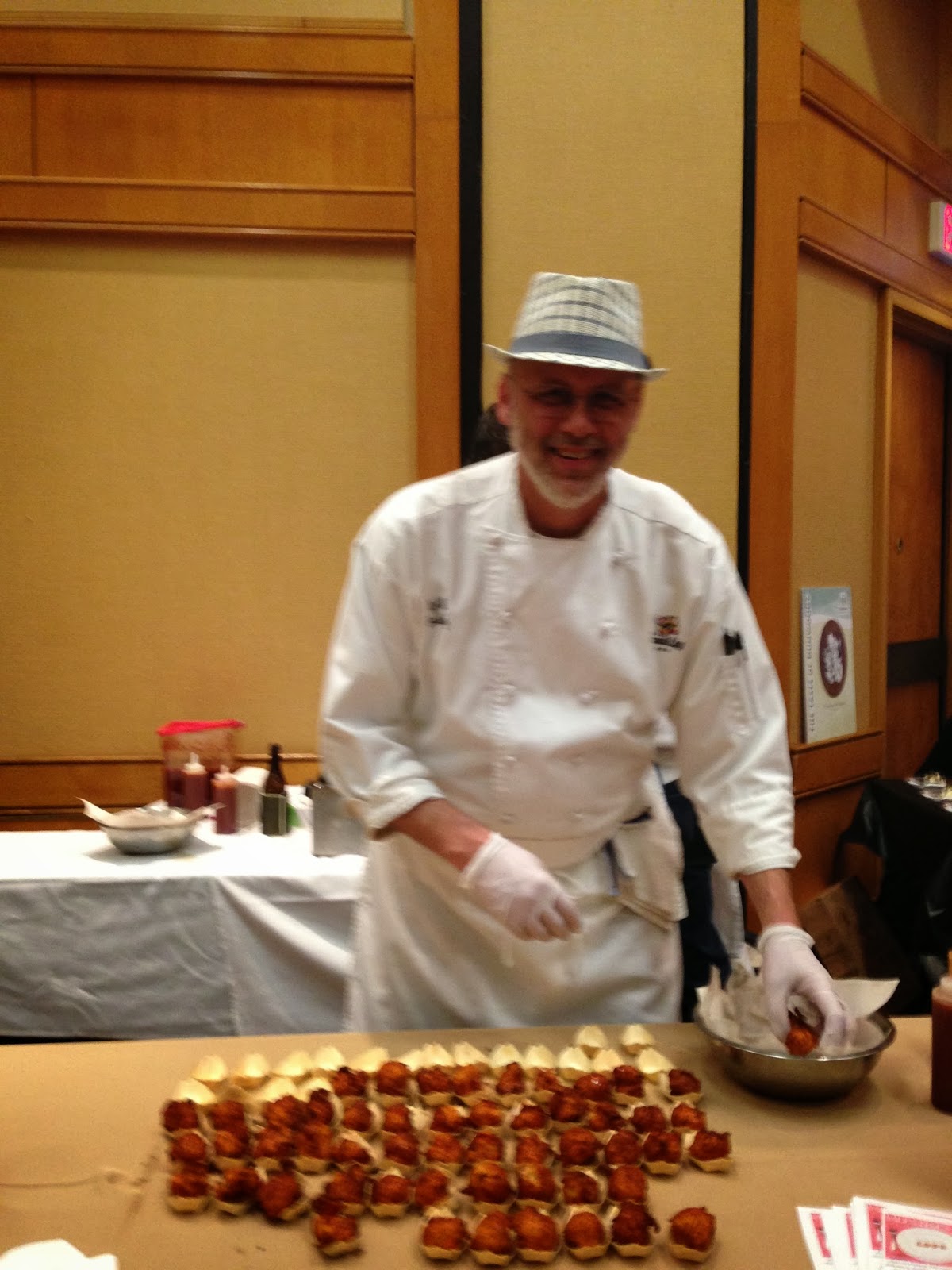 Lobster and Gouda Man!  Needless to say, they had run out of food by the end of the night! 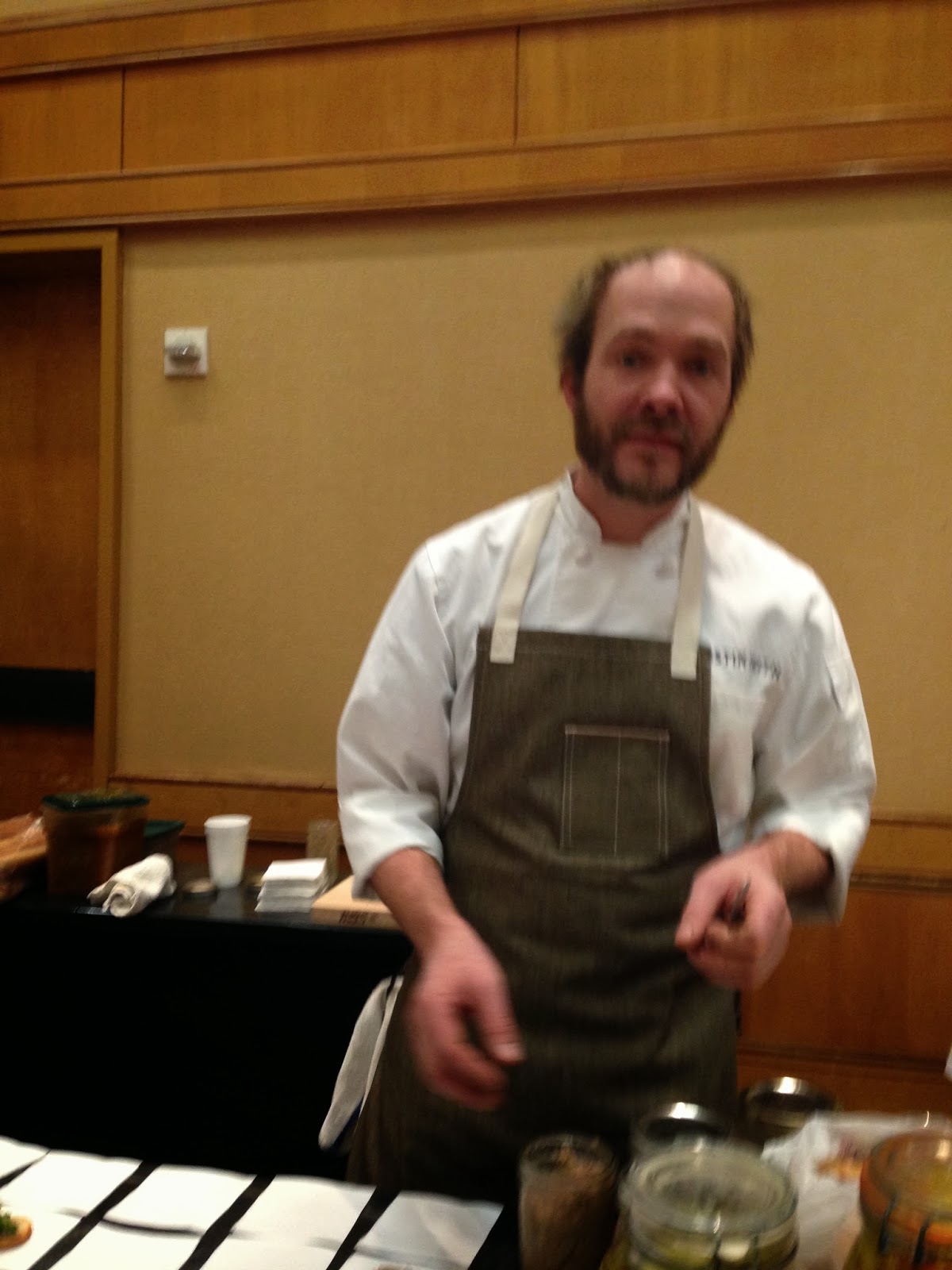 Another friend with a duck pate and microgreens canape.  Dude had me at "duck". 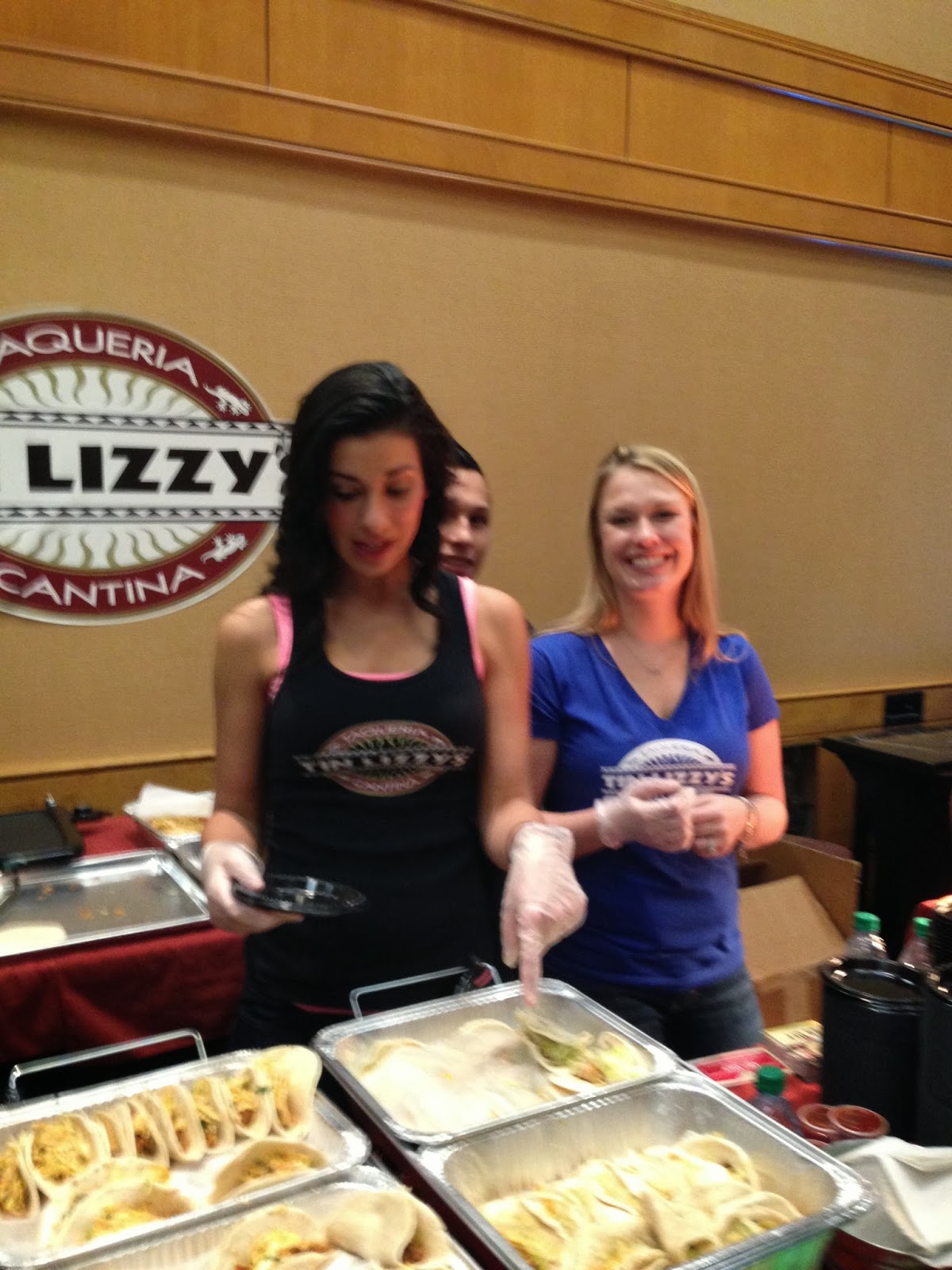 The girls from Tin Lizzy. 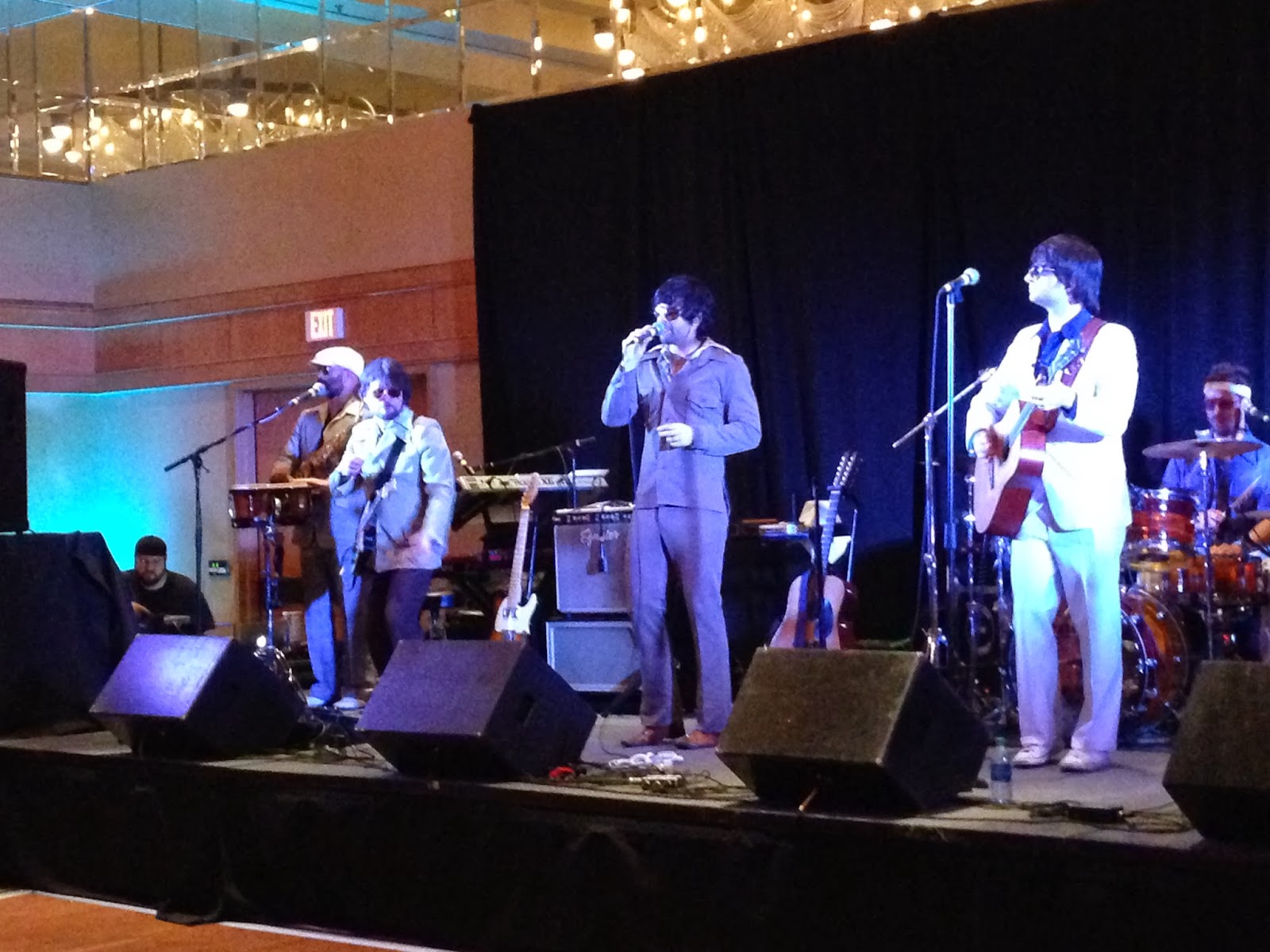 Yacht Rock Revue takes the stage.
Very kind of them to leave the Captain & Tenille divorce story alone for the night and just crank out the tunes. 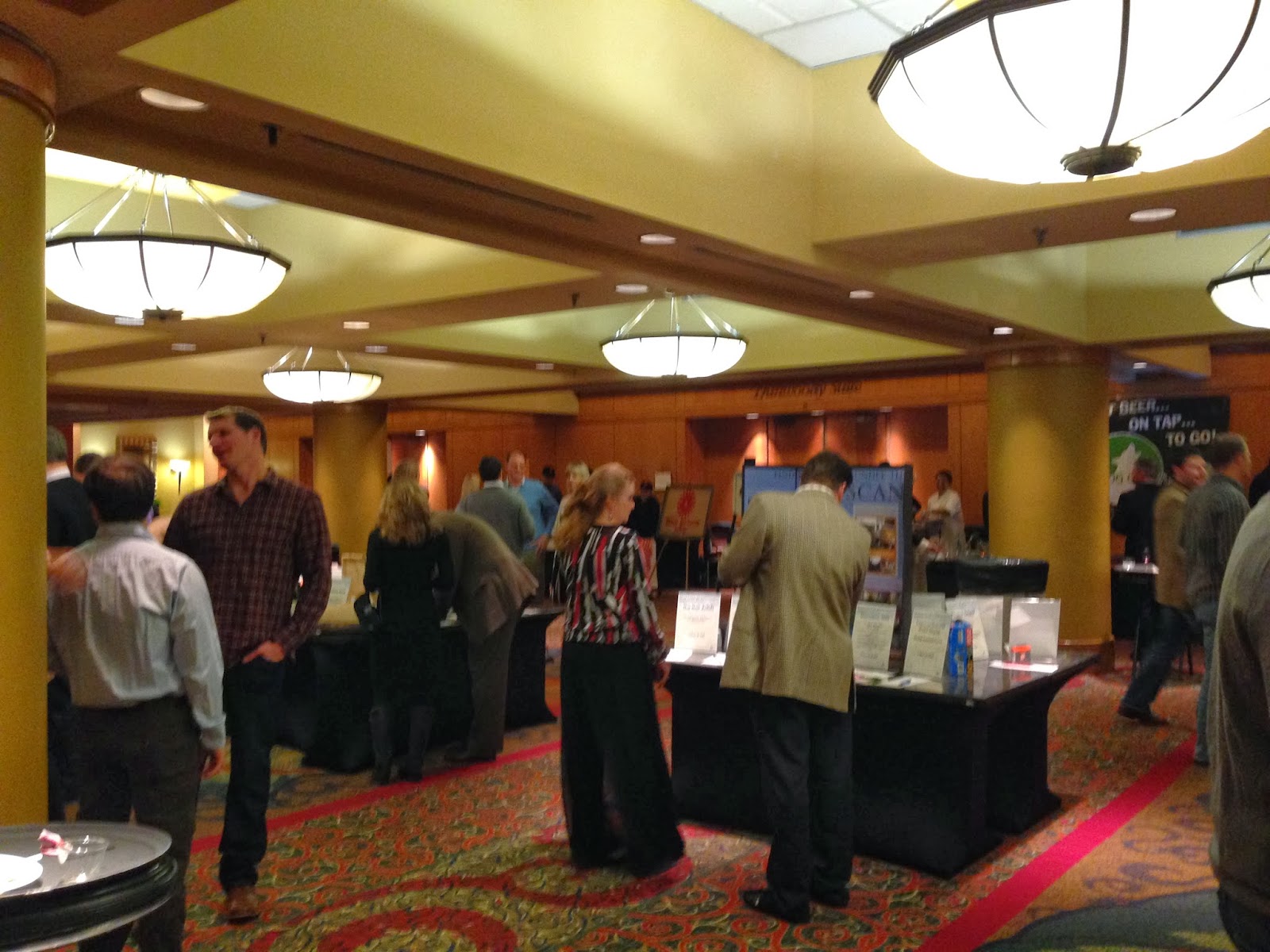 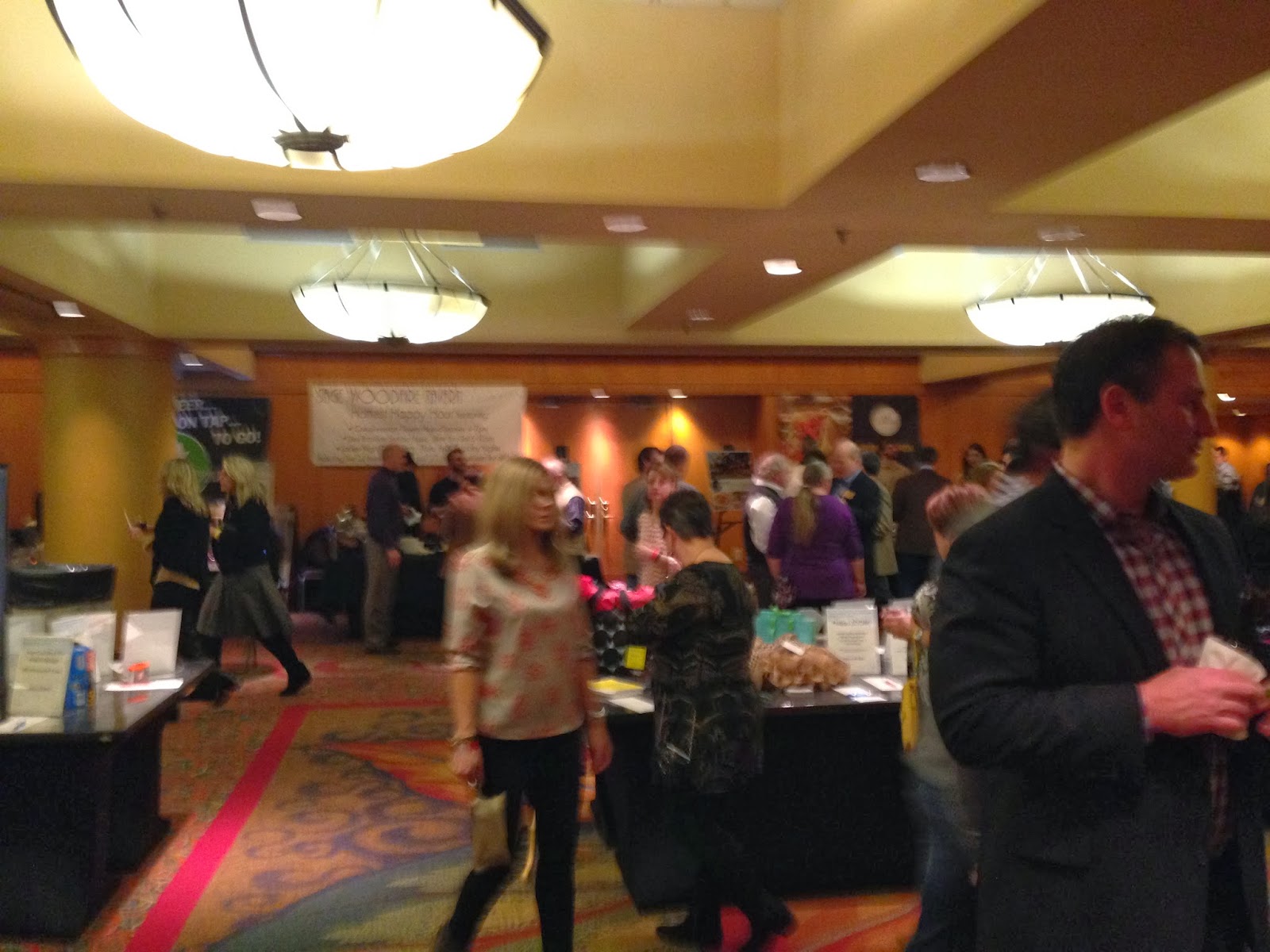 More silent auction and restaurant sponsors from the POV of the bar line as my other half and I burned through drink tickets. 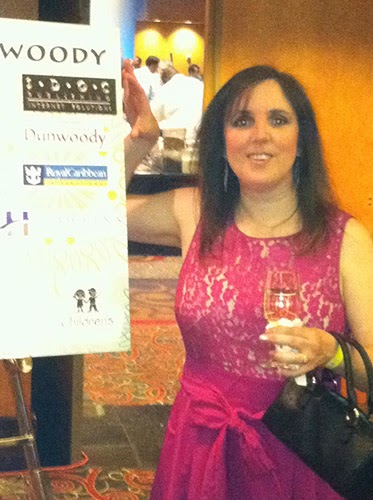 The obligatory self portrait next to the sponsors listing. 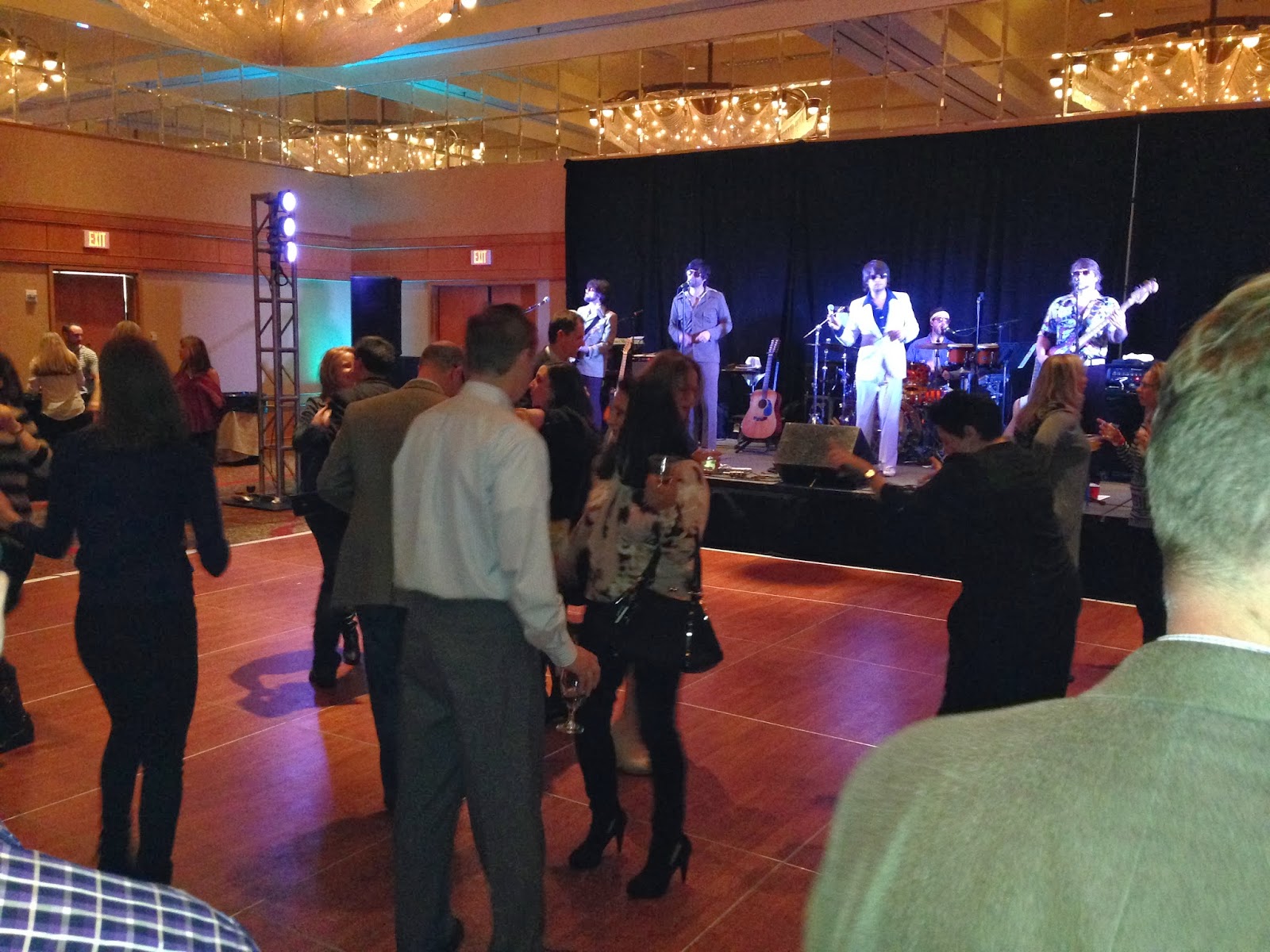 The alcohol has worked its magic and the dance floor fills as Yacht Rock returns from their break.

The most frequent words of the night were "thank you".  Terry made it a point to visit each of the restaurant reps and thank them for being a part of Dunwoody.  CHOA's development team made it a point of thanking all of the sponsors for their support in making the event happen at all.  It's too easy for Dunwoodians to go for the jugular at the slightest (lack of) provocation.  Don't forget to acknowledge the positive; it's good for you. 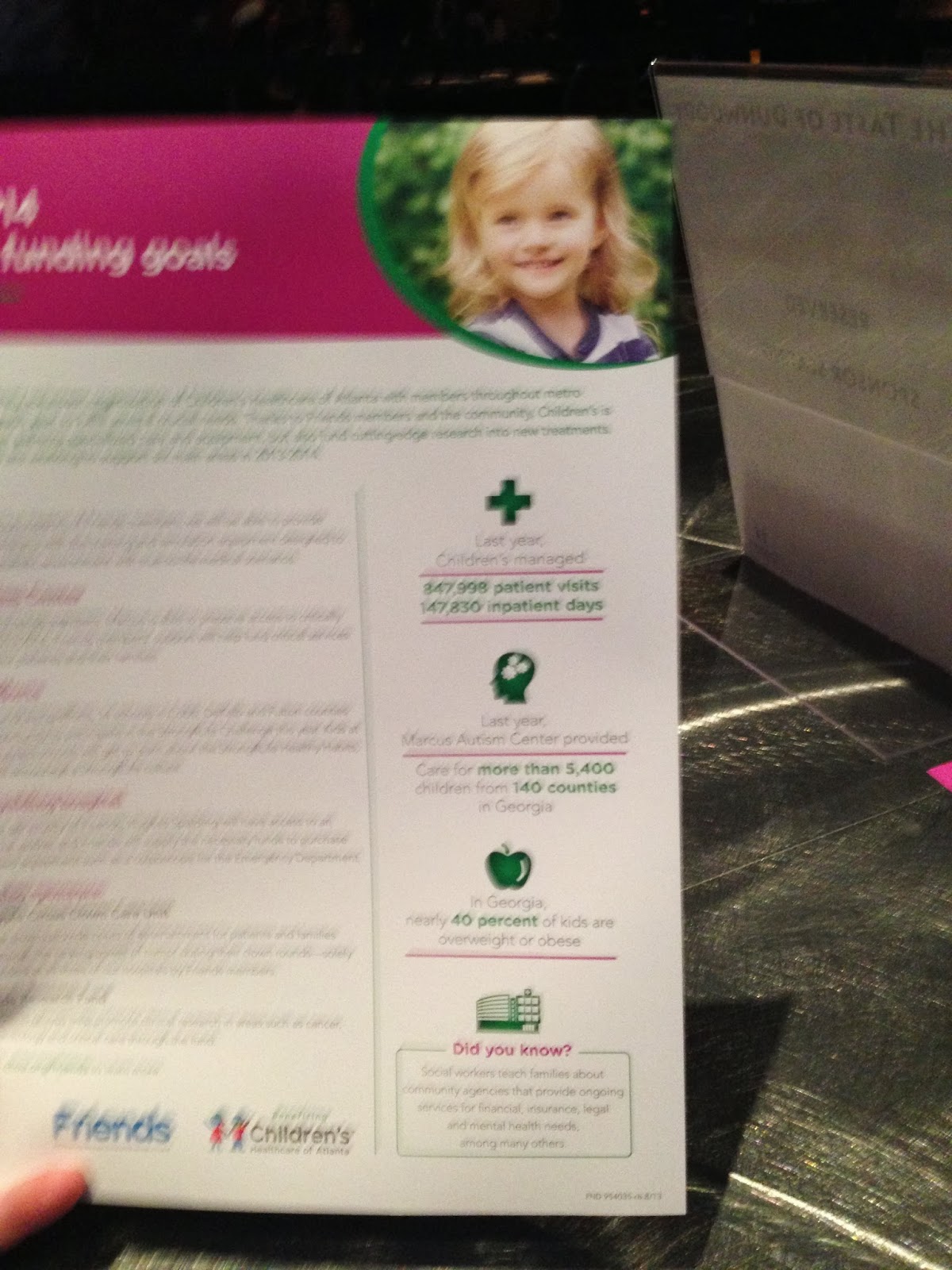 This flyer was distributed at the sponsor seating areas highlighting the work that CHOA does in the areas receiving funding from last night.  In case it's hard to see, even on the full-size image, the key details are:

CHOA had almost 850,000 patient visits last year alone.  Some of them might have been kids of the folks reading this post right now.

The Marcus Autism Center, one of the projects benefiting from the gala, treated 5,400 children from 140 countries around the world in 2013.

The downstream impact of the Marcus Center is far beyond kids with autism.  Everything the center learns from teaching autistic children can be applied eventually to youth with a host of other conditions that are unrelated, but involve compromised sensory processing - including:


Because of the funding raised by Dunwoody Friends and Taste of Dunwoody, there's an entire population in Atlanta and beyond who have a chance to be as happy and enjoy life as everyone did last night.
at 6:59 PM

Sounds like a great time was had by all.