This recap has been making the rounds in my head since lunchtime Wednesday but I had a killer job commitment to square away first (which will be the subject of another post) and my grey matter is officially fried to a crispy golden brown.

Any event, including parades that have over 130 entries and over 30,000 spectators is a logistical juggernaut.  What is a relaxed holiday morning for most families is a study in "how to handle Plan B" by the organizers.

First - the BlackHawk chopper landing.  My husband was in the Village gathering Nectar of the Gods (coffee) when it approached and tried to land - at least three times.  He came back giggling about how tents were blown around like toys and how could anyone not think that the after-parade party setup would need to be better secured?  It was only later we heard that someone was injured and the story instantly became not-funny.

Second - Dunwoody Police reported on their Facebook and Twitter pages that a child either fell off or jumped off a float and then was caught under the trailer.  I saw the golf cart take off down Mt. Vernon in response, and I remember thinking that it had to be a medical emergency.  Every parade parent's nightmare.  This is why I haven't marched in the parade with my own kids yet.

Third - if the initial delay due to the injury wasn't enough, a classic car stalled out.  How did we know this?  Because the boy scouts accompanying the car pushed it to the end of the parade.
It would have been easy to just ditch it in a side street and keep it moving.  These boys had some serious guts - and leg muscles - to keep their entry going.

Any one of these events could have derailed the entire day.  But they didn't.  The parade organizers, police, EMS, and anyone else involved in running this parade dealt with the situation, assisted those who needed help, and kept the parade going.  That is what I call commitment and civic pride.

Couple that with having Georgia's largest 4th of July parade hosted by a private not-for-profit, as well as a variety of fireworks displays around the area (we're regulars at Chamblee's display in Keswick Park) and you have a full day's worth of old-fashioned, small-town, family holiday fun, guaranteed to wear out the most energetic kid and the production requires little to no tax money for Dunwoody.

Safety is always a conversation at parade time.  I imagine it will be an even bigger topic in 2013.  Unfortunately, there's not much the parade organizers and marshalls can do to enforce individual common sense in a 30K crowd.

Case in point:  THE POTATO. 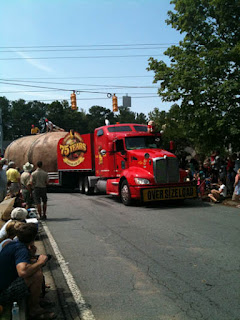 I almost didn't believe Bill and Stacy during a DHA meeting when they said this exhibit was joining the parade.  Giant anything is a crowd-pleaser!  I still think it would have been funnier if someone "forgot" to tell Publix that it would be parking in their lot.

Again, logistics with making sure the trailer can navigate Dunwoody Village Parkway, where to put it at the end of the parade, etc.  In spite of the above incidents that found their way through the crowd before this part of the parade came, in spite of the newly-heightened awareness of safety this year, you still had the scene below: 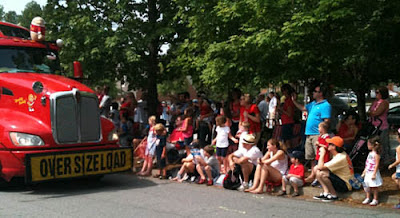 The left wheels of the semi had to pull all the way to the left of the road to line up the trailer.  That front bumper and fender are no more than 18-inches away from the curb.  And what is on the curb?  Kids hanging out, of course, while their parents hang out right along with them.  Believe me if my kids were on that side of the street I would have yanked their little behinds off that curb faster than you could say "french fries".  This close call could have been the fourth big glitch of the day but thankfully, it wasn't.

The parade is an example of why I'm proud of Dunwoody.  No matter what else is happening in government, our jobs, our neighborhoods, good or bad, there is always a time to put "every day" aside and enjoy all that we have in common.

We are adding a requirement for floats that those entries with kids under 12 have an adult on the float with them who is charged with monitoring safety. The boy who fell jumping on and off a float was not broken or bleeding, just crying. Landing are slower than takeoffs...so more wind. only 2 tents were damaged because we had a 100 foot setback from the LZ. Those two old canopies belonged to non-profits and we had no control over what they brought. We had them staked down, and the stakes held, but the stress bent the lightweight metal parts. We agreed to replace the canopy that the Scouts had borrowed from a church. The guy in his 80's who got blown down was not hospitalized and is in good spirits. I expect he will stand further back next year.
Safety is a primary concern for a parade. Thankfully Dunwoodians are known for taking personal responsibility seriously. On another note...should we reallow super soakers and the like for parade participants?

You'll not hear me turn down a chance to get cool on a hot July day. The kids would go crazy for it.

As always not everyone will go for the idea, you have additional safety questions, etc. But I think it's worth it to give it a chance.